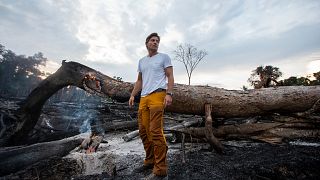 The devastating reality of climate change became irrefutable in 2019 when the Amazon rainforest erupted in wildfires. Over 30,000 outbreaks were detected in August alone as land was cleared by farmers and trees burnt for agricultural purposes. With fires having spread more rapidly due to the dry season in South America, this rate of deforestation is unprecedented on such a scale.

The world watches on as habitats are destroyed and hundred-year-old trees are burnt. Despite covering only 1% of the planet’s surface, the Amazon is home to 10% of the world’s wildlife species, according to WWF. Deforestation not only harms animals by ridding them of their homes, it means we are not benefiting from trees’ “mindblowing” ability to capture carbon dioxide from the air and absorb it, say scientists. The loss is near irreparable as reforestation takes years for trees to reach the same maturity – some were up to 250 years old when they burnt down.

Just this week, it was reported that Amazon deforestation could speed up in 2020.

“It would be expected that it will be worse than last year unless something really big happens in the next two or three months to avoid the high season of deforestation that starts in May," Tasso Azevedo, coordinator of ‘MapBiomas’ which monitors the rate of forest destruction, told Reuters.

In the same report, prime minister Bolsonaro claims his government is “protecting the rainforest adequately.”

Numerous celebrities have taken a stand to address the gravity of the Amazon crisis, from donating funds to simply spreading the word via social media. Kendal Jenner’s 121 million followers will have seen her Instagram stories re-posting photos of the fires, featuring big red exclamation marks to raise the alarm. Madonna, Cara Delevingne and Ariana Grande also took to Instagram in 2019 to express their frustration with the lack of media coverage, using the hashtag #PrayForAmazonia.

More significant contributions came from stars like Leonardo DiCaprio who pledged $5 million to Amazon relief back in August. Actress Vanessa Hudgens is another example; she informed her followers that she donated to the Amazon Conservation Team “to try to proactively help.” But more generally, there was a surprising lack of celebrities emerging saying they had donated money, with most preferring to simply post photos of the wildfires on social media.

What’s more, few have actually visited the Amazon rainforest to witness the effects for themselves. Game of Thrones star Nikolaj Coster-Waldau, who plays Jaime Lannister in the award-winning TV series, has taken a more direct approach and partnered with the United Nations Development Programme (UNDP). As UNDP Goodwill Ambassador, he travelled to Peru to investigate further into the causes of the fires and shine a light on issues being largely ignored.

Nikolaj Coster-Waldau and the UNDP

Appearing in a 7-minute video, Coster-Waldau attempts to get to the bottom of the wildfires, travelling to the worst hit areas in Peru like Pucallpa, Ucayali and Codo de Pozuzo, Huanuco to speak to forestry engineers and locals.

“These communities are often living in extreme poverty and have an impossible choice: they are the guardians of the Amazon, but they also have little choice but to clear sections of it in order to plant crops just to survive,” he says.

By communicating directly with hard-to-reach indigenous communities, Coster-Waldau highlights a pressing issue at hand, the prevalence of social inequality and poverty in Peru. Speaking in the clip, he explains that farmers need to feed their families and earn a living by growing crops, so they have no choice but to clear land to make space for agriculture.

This is a problem for many communities because the Amazon rainforest covers more than 60% of Peru. Due to a lack of basic infrastructure and resources, they rely on deforesting their plots to survive.

Is there a solution to the crisis in the Amazon?

The Game of Thrones star goes on to document an alternative farming initiative, practiced in 134 private conservation areas in Peru, hoping that it can be rolled out on a larger scale to protect more of the rainforest. ‘Agroforestry’ allows farmers to grow crops within dense forest landscapes without the need for deforestation.

Working side by the side with the UN, Coster-Waldau is addressing the reality of climate change on the ground. He urges us to look at the real, human reasons behind accelerated climate change and invest in sustainable agroforestry solutions.

“If we don’t address inequality on a global scale, then we won’t be able to fix climate change. It’s complex, but there’s hope. We have the resources, we have the technology. We just need to do it. We need to come together as individuals, as communities, as nations. And if we do that, we can solve the problem,” he concludes.

As part of its commitment to the Paris agreement, Peru is pledging to reduce deforestation and support sustainable development, but the UN says more needs to be done.