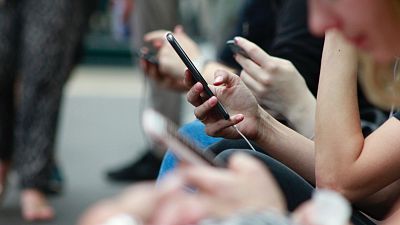 It sounds like something out of a sci-fi film, newspapers playing flashy adverts on repeat and lines of products emitting a multicoloured glow on supermarket shelves.

Miniaturised, single-use electronics, however, are a lot closer to becoming everyday reality than you might think. During the holiday season, two apparent firsts appeared to herald an electronics revolution that would bring light and moving graphics to even more of our already scarce tech-free moments. Beyond being a reminder of the inevitable technology takeover, this revolution is one that has the potential to bring disastrous consequences for the environment.

A first for free London newspaper

In London, UK supermarket M&S took an innovative approach to the launch of their 2019 holiday advert. Christmas campaigns can be very serious business for British retailers and to make the most of their jolly jumper escapade M&S targeted travellers arriving at three of London’s busiest stations. Alongside flash mobs with dancers donning cheesy jumpers, part of the promotion appeared to signal a potentially worrying shift in advertising tactics; the first newspaper cover with a miniature, built-in screen.

Handed out for free to 5,000 people at London’s Waterloo, Euston, and Liverpool Street stations, the cover wrap of the Metro newspaper contained a screen which played the company’s 59-second long advert on a loop. With volume and video controls, the piece of tiny tech even featured speakers so that the advert's soundtrack, House of Pain’s “Jump Around”, rang from abandoned papers in post rush hour underground carriages. Annoying at best or massively irresponsible according to some campaigners. Environmental activist and frequent critic of unnecessary waste, George Monbiot wrote that it was “hard to think of a more profligate form of disposability” calling the adverts “disgusting waste” in an article for The Guardian.

When confronted by Monbiot and a group of enraged eco-conscious commuters on twitter, M&S reiterated that they had only produced a limited number of copies. “We’d like to reassure you that the cover wrap & paper are widely recyclable & the video screens can be recycled via electrical appliance collection points,” the UK supermarket added in a tweet replying to the online furore. Potential recyclability aside creating advertising that increases waste in such a seemingly unconsidered way doesn’t seem contingent with M&S’s “Plan A” environmental standards, standards that claim they are aiming “to be a zero-waste business across all that we do”.

Placing the responsibility of proper disposal on commuters doesn’t seem likely to yield positive results, either. On any other day, hundreds of these free newspapers end up strewn across London. In 2007, the contractor in charge of maintaining the tube, Tube Lines, revealed that passengers were discarding nine and a half tonnes of paper every day on just three of the network's eleven lines. Given these figures, it seems optimistic to expect that when handed one of these video screen covers the average person is going to take the time to bring its electrical components to a recycling point, particularly first thing in the morning on their way to work.

“Would you dispose of fruit in a battery bin?”

Not long before M&S’s mini-screen misstep, another story surfaced showing off light-up bottles launched in Singapore to promote the release of the newest Star Wars film. On two special edition bottles, paper-thin printed electronics link Organic Light Emitting Diodes (OLEDs) to single-use energy sources illuminating characters from the film. The reported lifespan of the built-in battery was 40 hours or around 500 illuminations of the tiny lightsaber.

It’s likely that a lot of these bottles will end up on collectors’ shelves but it isn’t really the individual bottles but what their use by a major global brand could indicate for the future that is worrying. Excessive packaging is already a pressing environmental concern as massive amounts of otherwise recyclable waste ends up in landfill with 8 million tonnes of plastics entering our oceans each year according to a study by the University of Georgia. Coca-Cola was named the biggest polluter in a global audit of ocean pollution in 2019 so cleaning up their act could have a big impact on marine life.

When asked to provide more detail on how these single-use electronics fit with their environmental policy, a spokesperson for Coca-Cola Singapore told euronews Living that the labels on their light-up bottles are “environmentally friendly and recyclable”. The labels are made by smart packaging company, Inuru, who state on their website that the dyes in their OLED technology are similar to those that provide colour in sports drinks. In regard to their single-use energy sources, they ask, “Would you dispose of fruit in a battery bin?” with the explanation that they use battery technology which works somewhat the same way as the common school experiment of powering a lightbulb with a lemon. All a bit vague, really, but when approached to provide further comment and explanation, Inuru didn’t respond.

As an indispensable part of our everyday lives, electronics have become the largest and fastest-growing source of waste worldwide. It’s not necessarily about the components used or their recyclability but instead the fact that these companies are adding to a growing e-waste problem. “We don’t replace electronics because they are broken,” says E-waste recycling expert and Director of Sofies UK, Federico Magalini, “we replace electronics because we want to change them.” Our addiction to new electronics is getting out of hand. According to a UN report, we produce as much as 50 million tonnes of electronic and electrical waste every year; more than the weight of all the commercial airliners ever made.

Only 20% of this very valuable waste is handled properly, according to the same UN report, with 80% ending up in landfill or informally recycled. This informal recycling is often done by hand in developing countries and can lead to workers being exposed to potentially cancer-causing substances like mercury, lead and cadmium. The World Health Organisation states that the processing of hazardous components in developing and emerging industrialised countries poses a significant health threat to children who can be both, directly and indirectly, involved in unsafe recycling activities.

“Electronics are safe when they are in our houses,” says Magalini, “but we need to make sure that recycling is done properly.” He adds that if we look around us we are likely to find somewhere in the region of 700 different types of electronic products. Each of these different items, from fridges to vacuum cleaners, requires its own careful deconstruction to prevent toxic elements from being released and endangering workers.

Despite being a complex process it can often be well worth it, e-waste is a valuable form of recycling that can contain precious metals like gold, silver and platinum. More gold can supposedly be extracted from a tonne of electronics than from the same amount of gold ore, Malgiani tells me and up to 7% of the total amount of the metal on the planet is said to be tied up in old smartphones, laptops and other electronic items. He explains that some components even contain metals that are becoming relatively rare, a fact that makes recycling even more important.

On top of problems with informal recycling, getting specific parts of these products, whose designs are often closely guarded, to the correct recycling stream can be difficult, a problem he anticipates could be worse for single-use electronics like mini-screens in newspapers.

“Not many people will discard them in the proper way,” he says,“ they will end up in the trash bin and then in the wrong waste stream.” Recycling, Magalini thinks, could mitigate the problem but only if places to drop off small waste electronics are made more accessible. Giving the example of a battery deposit at his children’s nursery making the potential for recycling a part of his everyday routine, he adds that if you could easily find the correct electronics recycling location at your local train station it would improve the situation for all small electronics.