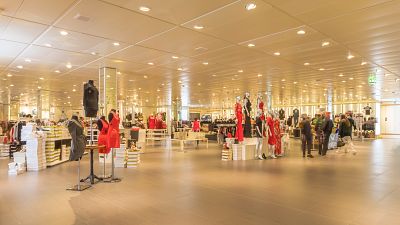 Sustainable fashion store concept All Good Things is set to take off in the UK, with a host of new store openings set for next year following the success of its first locations.

Its debut store in opened in Bristol in October, followed by another at the Midlands’ Intu Merry Hill mega mall in November.

The store concept promises up to 65% off recommended retail price of designer fashion wear and exclusive items. It achieves this by taking on dead stock from 35 designers and brands, providing customers a bargain deal as well as an ethical way to shop.

All Good Things says the approach prevents some of the 30% of designer clothing that fails to sell during their initial run in store from going to waste.

In addition to a TK Maxx-like sale of intermingled brands on the main shop floor, the All Good Things team added a members only area dubbed Insider. There, brands that demand more control over how they’re merchandised, choosing which brands they sit next to.

Four more shops are set to open in the early stages of 2020, giving shoppers across the UK access to greener fashion. In some cases, that is a literal interpretation as each shop features a living wall of greenery and foliage behind the tills.