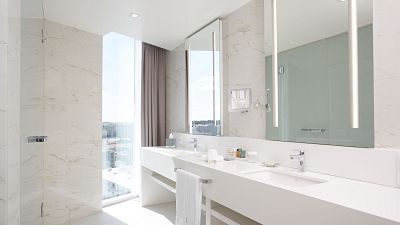 Hotel giant Hilton is set to prevent 58 tonnes of soap from going to landfill every year in the UK. The group has partnered with US-based social enterprise Clean the World to create more than 700,000 new bars to distribute to those in need.

It’s part of a Europe-wide expansion of Hilton’s soap recycling programme, which it hopes will result in zero leftover soap bars being sent to landfill globally. The scheme will roll out from June 2020 across Hilton’s Waldorf Astoria, LXR, Conrad, Canopy, Signia, Hilton, Curio, DoubleTree, and Tapestry hotel collections.

Five million partially-used bars of hotel soap are thrown away every day, according to Hilton. Meanwhile thousands of people die due to lack of access to basic sanitation.

More than 100 hotels across the UK will join the soap recycling initiative to support Hilton’s Travel with Purpose 2030 Goals to halve its environmental footprint – including specific targets to send zero soap to landfill and reduce waste output by 50%.

“It is our responsibility to protect our natural resources and ensure destinations across the world are preserved for generations to come,” said Simon Vincent, executive vice president at Hilton and president of its Europe, Middle East and Asia operations.

“The expansion of our soap recycling programme not only helps us to reach our environmental goals, but also contributes towards tackling the significant hygiene epidemic which sees around 3,600 children under five die every day due to lack of access to clean soap and water.”

Read more | How do you make a luxury destination carbon neutral?

“Partnering with brands such as Hilton helps us to deliver much-needed hygiene supplies to children and families in times of need," added Shawn Seipler, founder and chief executive officer, Clean the World. “We are thrilled to expand our existing partnership to Hilton’s hotels across Europe, as it will enable us to take another important step forward in our fight against hygiene-related illnesses.”

To meet its target to reduce waste output by 50% by 2030, Hilton has also already banned plastic straws, cocktail picks and stirrers at all its hotels globally. To bolster this commitment, the company is also continuing to transition from single-use toiletries, with the majority of rooms around the world set to feature full-size amenity dispensers by the end of 2020.