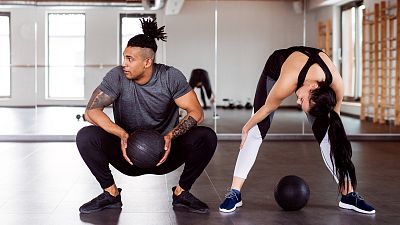 Fitness enthusiasts around the world are about to take up the challenge to burn calories and earn money towards planting more trees.

Participants will sign up to the Train For Trees challenge on fitness app Motosumo, which measures their calorie expenditure during gym sessions and classes. Then Denmark-based makers of the app are planning to plant one tree for every 2,000 calories burned in association with the Arbor Day Foundation.

Those 2,000 calories are equivalent to a 14-inch cheesy pizza – bigger than Domino’s large size.

If Motosumo is to plant its maximum of 3,000 trees, users would have to burn 6 million calories during the weeklong challenge from 23 November to 1 December.

“Motosumo currently has thousands of active users all over the world,” he said. “Together, they burn an average of 4 million calories and pedal 210,000km per week. We’re confident we’ll meet the challenge.”

The app works by tracking Bluetooth-enabled heartrate monitors, meaning every bike ride, squat, jump or brisk walk will count towards the total. Motosumo will allow users to access a leaderboard after every workout to see how many trees their gym has contributed and how they compare with the competition.

The plan is all part of the #TeamTrees initiative launched in October.

YouTuber Mr Beast agreed to the challenge to plant 20 million trees by the end of 2019 in October of the same year. Known for accepting outlandish dares, he aimed to raise US $20m, and use the money to plant a tree for each dollar raised.

The campaign came into the spotlight after philanthropist and eco-tech mogul Elon Musk made a donation. Other backers have carried the campaign to almost 16 million trees so far.

Some scientists believe trees could be a major weapon in the fight against global warming. They absorb CO2 and pump out oxygen, as well as providing habitats for wildlife, minimising the effects of flooding, and combatting soil erosion.