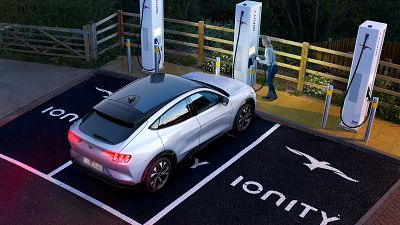 The Ford Mustang is adding a new model for the first time since the launch of the Mustang II 55 years ago, with plans for the new Mach-E SUV model to hit Europe by the end of next year.

Despite being electric, the car’s makers are determined it won’t be boring. “It’s fast. It’s fun. It’s freedom,” said executive chair of the Ford Motor Company, Bill Ford. “For a new generation of Mustang owners.”

Indeed, everything about the new car is set to be quick, with a GT edition going from 0-62mph in under five seconds. Charging will also be speedy, filling 70% of the battery in just 38 minutes in a fast station. It will be available with either rear-wheel drive or four-wheel drive systems, and will drive up to 370 miles before running out of juice.

Its engine won’t be the only high-tech feature, with Ford introducing voice recognition technology as well as a 15.5inch touchscreen entertainment system.

“The Mustang Mach-E is one of the most exciting vehicles Ford has ever introduced,” said Ford of Europe president Stuart Rowley. “This purpose-built all-electric vehicle is unique, but still unmistakably a Mustang, and it’s coming at exactly the right time for customers in Europe.”

“This all-new vehicle represents so much more than just zero-emission driving: it’s about stress-free experiences and total peace-of-mind for all-electric vehicle owners,” he added.

The future of Ford

Exact specifications and cost of the car remain unknown.

The American motoring giant says the Mustang Mach-E will be just one of 14 new electrified vehicles it plans to launch in Europe by the end of next year.

To ensure those new cars have adequate access to charging points while on the roads, Ford also is a founder member of the IONITY consortium that aims to build 400 high-power-charging stations in Europe ahead of the launch.