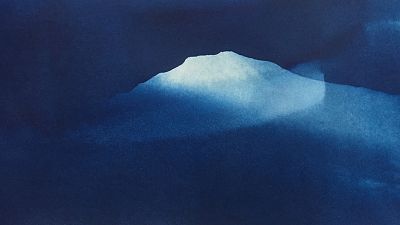 A new exhibition celebrating artists’ changing interpretation of the ocean has been unveiled in London.

The Blue Marine Foundation (BLUE), a charity dedicated to creating marine reserves and establishing sustainable models of fishing, joined forces with artist Andrea Hamilton to bring the show to the public. Proceeds from the show will be split equally between artists and BLUE.

It features the work of 36 artists, whose diverse representations of water are inspired by their own experiences of the element. Many of the artists, who include painters, photographers, sculptors and abstract artists, live by the sea and have been influenced by climate change and overfishing.

Curated by Nico Kos Earle, the thought-provoking and intuitive works in the show offer a range of media, from bronze sculptures and oil paintings to cyanotypes, photograms and LED light-based works, reflecting an ongoing connection to, and observation of, the ocean.

Those with works on display include Chris Levine, who created a uniquely coloured ‘Blipvert’ which can only be seen with peripheral vision. Celebrated sculptor Hamish Mackie’s ammonite aims to remind us that the sea has been vital for survival since Jurassic times.

Belgian sculptor Koen Vanmechelen’s work explores the interplay between art, science and philosophy, while Deborah Tarr’s sumptuous abstracts have the same meditative power as a wild, rolling sea. Meanwhile Nancy Cadogan, fresh from a sell-out show at the Saatchi Gallery, examines the power of the sea inside our minds.

“The high seas play a vital role in absorbing the heat from man-made climate change and in providing the oxygen we need to breathe. But a healthy and climate-resilient ocean is one filled with natural life,” says Clare Brook, BLUE CEO.

“Protecting the biodiversity of these vast areas is therefore vital for the future of humanity. Yet it is being ravaged by industrial-scale fishing and deep-sea mining, including at the Mid-Atlantic Ridge’s field of underwater chimneys that scientists believe is where life on Earth began.”

You can find the Artists for BLUE exhibit: