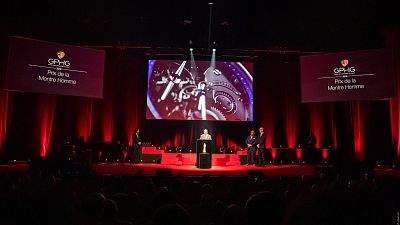 “Be alive, be audacious, do beautiful things together”

The 19th edition of the Grand Prix d’Horlogerie de Genève (GPHG) announced its winners last night during a glamorous awards ceremony in Geneva’s Théâtre du Léman. The main prize, the Aiguille d’Or Grand Prix, was won by Audemars Piguet and its groundbreaking and almost unfathomably-slender Royal Oak Self-winding Perpetual Calendar Ultra-Thin watch. Outspoken CEO François-Henry Bennahmias also picked up the Men’s Complication Watch and Iconic Watch Prizes for the brand, on what will be a memorable night for even as storied and respected a watchmaker as Audemars Piguet.

Arguably the most opulent category, the Jewellery Watch Prize, was won by Bulgari’s sumptuous Serpenti Misteriosi Romani. Jean-Christophe Babin, Bulgari CEO, commented on the timepiece’s ultra-lavish nature while addressing the crowd of watchmakers, collectors and journalists, but concluded on a defiant tone: “We all respect each other, but we all want to win. Be daring, audacious, break the rules. Break the mould.”

The small, the new and the brave were also rewarded. Kari Voutilainen’s eponymous brand went home with two prizes, his 28ti winning best men’s watch and the stunning Starry Night Vine winning the Artistic Crafts Watch Prize by bringing together the design traditions of the East and West in one unique timepiece. The Mechanical Watch Exception Prize was won by Genus with its GNS1.2, a coup for a home-grown company in its infancy, and one that is proof of Geneva’s continued importance in elite watchmaking.

A popular winner was Urwerk and the AMC, which snapped up the refreshingly-titled Audacity Prize. The AMC uses a 35kg atomic master clock to rewind the wristwatch, set it to the correct time and, if necessary, adjust its rate. The watch rests in a cradle within the atomic clock itself, a symbol of watchmaking’s dedication - bordering on obsession - to the pursuit of the new. The Urwerk team embodied this better than most with a speech-finishing rallying cry of “long live the insanity of the modern watchmaking world!”

During the ceremony, and on the eve of its 20th birthday, GPHG announced the upcoming creation of a watchmaking academy, set to open in Spring 2020. Supported by the City and Canton of Geneva, the academy will be made up of a wide network of ambassadors, each taking part in the various stages of watch selection in order to promote the art of watchmaking worldwide.

Finally, the night’s Special Jury Prize was awarded to Luc Pettavino, founder and organiser of Only Watch, a biennial auction of 50 one-off timepieces made by the finest manufacturers. Pattavino founded Only Watch in 2004, inspired by his son, Paul, who had been diagnosed with Duchenne Muscular Dystrophy. In collaboration with Prince Albert II of Monaco, all proceeds from the auction (the eighth edition is this Saturday, 8th November) go towards researching and finding a cure for DMD - the charity has so far raised more than 40 million Swiss Francs. Pattavino ended his speech with the lessons he’d learned from his son, saying that Paul had “taught us to be alive, be audacious, and do beautiful things together”. Sitting in the Théâtre du Léman on the watch world’s most prestigious evening, it seemed no group of people could reflect this approach to life more perfectly than the one that celebrates the art, science and joy of creating beautiful watches.