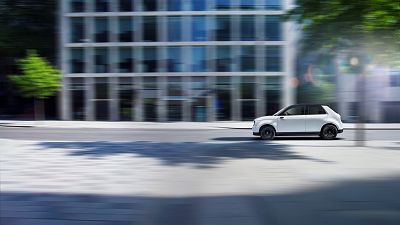 Honda has announced that all European mainstream models will have electric powertrains by 2022, three years ahead of the 2025 goal.

During an ‘Electric Vision’ event in the Netherlands, the Japanese company revealed its ambitious targets signalling its confidence in a greener future for the car industry in a bid to meet the latest EU emissions regulations. This new target will see 6 new electrified models released over the next 3 years, with the Honda E and hybrid-only Jazz at the forefront. The vehicles will range from mild-hybrids, to traditional hybrids, battery-electric vehicles and plug-in hybrids. Blazing a trail is the Honda E, which is solely electric, whilst the Jazz will only be available hybrid.

Senior Vice President of Honda Europe, Tom Gardener commented that “the pace of change in regulation, the market, and consumer behaviour in Europe means that the shift towards electrification is happening faster here than anywhere else in the world. As the pace of change continues to accelerate, we need to act sooner to meet these challenges head-on.”

During the event, Honda also announced they aim to unify all electric products under the branding ‘e: technology’. Signalling the cars environmental credentials, the label will explain the type of powertrain, e.g. ‘e:HEV’ stands for “Hybrid Electric Vehicle”.

Announcing its collaboration with Vattenfall, the Swedish energy supplier, Honda promises to make a huge step towards using renewable energy to sustain charging requirements. In 2020, the partnership aims to help make energy sources more cost-effective and promote electricity generated through hydropower and wind farms, starting with the UK and Germany, with the rest of Europe soon to follow. Gardener ensured listeners that Honda would eliminate diesel vehicles in Europe by 2021, in favour of these new sustainable models.

Thanks to EU CO2 emissions targets the car industry is rapidly changing for the better. An estimated 1 million EVS are set to be purchased in Europe in the next year, according to campaign group Transport & Environment. Among the first to commit to a fully electric future were Volvo as they made electric powertrains available in every new car as of 2019. Others such as Mini and Toyota have also made similar pledges to move away from fossil fuel usage.

Concerns about charging time and short range are often cited as limitations for the adoption of electric vehicles but with new battery technology allowing charging that would last 200 miles in as little as 10 minutes, conventional petrol and diesel cars could soon be a thing of the past.

Read more | Next generation of electric cars heading to Europe