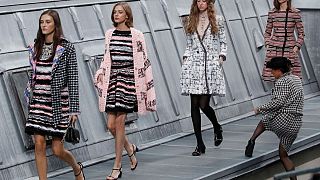 A woman has crashed the catwalk at Chanel’s Paris Fashion Week finale, jumping up onto the runway and walking amidst the models, much to the horror of security guards.

Having been a mere spectator of the Chanel show moments earlier, the room was aghast to see the female guest run from her seat and storm the catwalk herself, joining the finale procession. The audience watched as she strutted down the runway in a black and white tweed suit, not unlike a Chanel design itself. Hands on hips, she was seen posing her way along the recreated Parisian rooftop set in the Grand Palais, as guards struggled to locate her in the line-up.

Related: London Fashion Week: Can we buy ourselves out of this crisis?

Model Gigi Hadid appeared to step in after several minutes, blocking her from going any further, by taking the YouTuber by her shoulder and politely escorting her off the runway. Upon realising what had happened, Chanel president Bruno Pavlovsky was spotted laughing at the incident.

Who was the intruder?

The intruder has since been identified as Marie Benoliel, otherwise known as Marie S'Infiltre, her online alter-ego mainly active on Youtube. Marie is a comedian known for her satirical videos which make fun of French cultural and political phenomena, in many of which she infiltrates the fashion world and crashes catwalk shows. On Instagram as well as her YouTube channel, which boasts 227,000 subscribers, she appears to poke fun at the absurdity of human behaviour through the medium of satire and pranks.

This is a reference to the Etam underwear show she stormed earlier in September and can be translated as, “the etam fashion show was nothing compared to this.”

According to luxury fashion label Chanel, the intruder took them by complete surprise and she was "escorted to the exit by our security personnel afterwards." However, Chanel told AFP, "this is not the first time that she has done this."

Sources are speculating as to how she managed to gain entry to the show, as a formal ticket and ID is always required.

She wasn’t the only activist at Fashion Week

Alongside this more bizarre attempt to compromise Paris Fashion Week, there have been plenty more examples of activism this season. Protestors from animal rights group PETA poured "toxic mud" on their heads in front of the Eiffel Tower to make the statement that "leather is a dirty business", according to France 24.

"The leather industry produces dangerous toxic waste and is responsible for the deaths of more than a billion animals a year to produce fashion accessories that are destroying the planet," Marie-Morgane Jeanneau of PETA told AFP.

Spokesperson Bel Jacobs defended the concept of a fashion funeral, declaring “collectively we have the power to resist a system that is killing us".