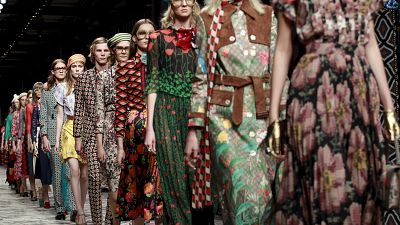 Luxury fashion titan Gucci has announced it will make its entire supply chain completely carbon neutral by the end of September.

Fashion week season is at large and following the first carbon-neutral runway show at New York Fashion Week earlier this month, Gucci has jumped on the bandwagon with an environmental announcement of its own. In this radical move, the brand will be tackling everything from its supply chain, to travel emissions for both guests and models at fashion week, to recycling and an end to paper invitations.

How is Gucci going carbon neutral?

CEO of Gucci Marco Bizzarri has revealed that the ambitious eco-strategy will extend not only to the supply chain, but to fashion week shows themselves. Although London Fashion Week is the talk of the town this week, it won’t be until Milan Fashion Week later this month when Gucci executes its first carbon-neutral runway. Bizzarri told The New York Times that the brand will offset the travel footprint of “1,000 guests and 900 workers, including models, production staff and Gucci employees”, use “recycled wood for the set” and provide paper invites that are “Forest Stewardship Council-certified.”

Gucci has already been monitoring its water and electricity consumption, offset by Kering in previous years, but this is the first time the Italian label is committing to go fully carbon neutral on the catwalk. It will hence be the first fashion label in the world to achieve an ISO 20121 certification (International Organization for Standardization) for a show, in other words, official recognition of sustainable event management.

When it comes to the supply chain, the timeline is just as imminent. Before the end of September 2019, Gucci aims to offset all greenhouse gases from its own direct operations, including from third-party raw-material suppliers and manufacturers too. Bizzarri said, “we know it’s not perfect, but we cannot afford to be complacent”, emphasising how he plans to support employees to “do their jobs in the most sustainable way possible.”

What is Gucci’s reputation on sustainability?

The luxury fashion brand has certainly been vocal about sustainability over the years, having released shoes made of bio-plastics right back in 2012, declared it will stop using PVC and switch from virgin to recycled plastic in 2015, and made men’s jackets out of fishing nets (Econyl) in 2017.

In 2017, Chief Executive Marco Bizzarri then outlined Gucci’s ten-year ‘Culture of Purpose’ sustainability plan at a Kering Talk at the London College of Fashion. This encompassed both environmental and ethical commitments, including joining the Fur Free Alliance to eliminate animal fur from its collections in 2018 and donating €1 million to UNICEF’s Girls’ Empowerment Initiative.

However, ethical rating app Good on You, which provides in depth reports on the sustainable credentials of fashion brands, has flagged some concerns. Good on You give Gucci the rating, ‘it’s a start’, a medium score based on the scale from 1 (We Avoid) to 5 (Great). The app praises Gucci’s “robust strategy in plans to reduce waste” along with complying with the “Restricted Substances List” of avoiding hazardous chemicals, and applauds Gucci’s membership of the Sustainable Apparel Coalition. Yet, it claims Gucci does not share a complete list of suppliers transparently and its animal rating is 'not good enough', using leather, wool and down without stating its sources.

Gucci signed a sustainability pact in August, at the G7 summit in Biarritz, and was one of the first signatories of the pact. However, details of its exact commitments were vague at the time, causing critics to hold the label to account. “Rather than pledges and commitments, we must hold those taking the pledges accountable otherwise it’s meaningless,” Qiulae Wong, head of product at the Common Objective told Euronews Living.