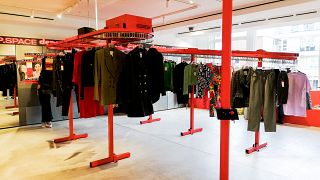 For the next three months, some of clothing resale app Depop’s best pre-loved offerings will be available in a pop-up shop hosted by London department store Selfridges as it establishes its first branded retail space outside of America.

Last year Depop, a popular clothing resale platform hosted on an app that has over three million users, made a move to bring its digital platform to the physical world by opening its first bricks and mortar locations. Starting with Los Angeles, California, the home of the company’s largest user base, a New York shop was soon added with the promise of further expansion across the Atlantic.

These American stores are described by Depop as ‘community spaces’ and seek to bolster the app’s strength in the online market rather than drawing customers away from it. With very little of their inventory present, instead of packing in clothing items to draw in crowds of consumers these locations are instead intended to offer a place for the sellers who are so essential to the success of the app to come together and explore new creative possibilities. Both of Depop’s previous locations feature a photo studio intended to help promising sellers to take the enticing pictures that are so essential to attracting online buyers.

So, how does the collaboration with Selfridges fit into this physical expansion? As the first Depop branded retail space outside of America, the pop-up feels a lot more tenuous than commitments to previous community spaces. Located on the shop’s third floor, in Selfridges' Designer Studio, during its three-month occupancy each week the curation of stock is turned over to prominent store owners on the app.

Related |Fashion: The Success of Resale

Selfridges has linked with Depop as part of their latest campaign, The New Order, which will invite influential individuals and brands behind some of fashions latest innovations to imagine what fashion might look like in the near future. With a selection of pieces hung on a ‘kinetic rack’ intended to mimic the scrolling of the apps usual digital interface, the store will include pre-loved luxury brands, reworked pieces, and collections by independent designers who have all made a success of selling on Depop.

Peter Semple, Depop Chief Marketing Officer, said in a press release “Depop’s mission is to empower the next generation to transform fashion,” and went on to add that a collaboration with a "fashion authority" like Selfridges is an exciting opportunity for sellers to extend their reach offline.

Empowering the next generation

Founder of cult eyewear brand Christianah Jones, Tianah, got started on Depop in 2012 when she was short of cash at university. After buying clothes impulsively and wearing them once she would sell them on the app so they didn’t go to waste. “I had the advantage at the time of being one of the few sellers with such a large inventory,” she told Euronews Living. Investing the money made on the app back into her product, her eyewear range was born becoming a resounding success with customers including celebrities like Billie Eilish, Bella Hadid, and even Beyonce.

Regarding the Selfridges pop-up, Tianah said “I had been trying to get into Selfridges and to have the opportunity to do so via Depop is a dream. It’s credible for the brand to be seen in Selfridges which increases brand awareness not only in London but from visitors all around the world”.

And that is the essential point of Depop’s experiments with physical locations, to empower the next generation to effect real change in the way we buy by providing opportunities for independent sellers to grow beyond the confines of the app. Head of London College of Fashion’s Innovations agency, Matthew Drinkwater, told Euronews Living “peer to peer garment sharing has the potential to change behaviour” adding that this evolution could have a future impact on the way that we consume fashion. This more circular approach to fashion sales could help to reduce waste.

Figures obtained from research by online secondhand clothing retailer, ThredUp, certainly seem to indicate that this change is already happening. The study shows that the resale of clothing through curated resale platforms has grown 21 times faster than the retail apparel market in the last three years with 26% of luxury shoppers asked saying that they now buy second hand. Convenience and trust were found by ThredUp to be the most significant factors in increased online secondhand shopping.

When I visited Selfridges to check out the pop-up earlier this week, it was all but empty in an otherwise busy shop. The only other people browsing the selection of pre-loved Moschino, Versace, and Gucci were there for their journalistic purposes, eagerly snapping photos to add to magazines and blogs. This seems to prove the point that Depop’s spaces in New York and Los Angeles are trying to make, it doesn't need a physical space to sell.

In fact, with a digital showroom larger than any physical shop it could ever create, the strength of the company's influence relies on the convenience of the app and the way in which its management of sellers ensures trustworthiness. Using these two key factors in the growth of online secondhand sales, Depop is creating change in the way that the next generation will buy and sell clothing.

You can check out Depop Space at Selfridges London Department store until the end of October, the stock rotates to focus on three new top sellers each week. You can also see some of the exclusive online apparel available here.

Going beyond CVs: why business should embrace the potential of digital natives, Generation Z ǀ View