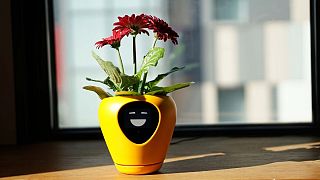 The inventors of a solar-charging bonsai tree are crowdfunding to launch a new plant pot that can communicate when conditions aren’t right for houseplants.

With a face reminiscent of a Tamagotchi, a range of emotions play across the Lua planter’s screen to let plant parents know when their plants could be running into difficulty.

Users would enter the type of plant they’re keeping in the pot onto an app, which would then calibrate the pot to react when its environment was potentially damaging to that particular species.

Its current format allows the pot to communicate when it’s too hot, too cold, over or underwatered, too bright or too dark with a range of faces.

It can also sense movement, at which point its eyes will follow a target across the room, as well as a range of other animations.

Having smashed its initial crowdfunding target of €30,000, the next phase of development would be to add a sensor that would let users know when rain is approaching, said developers.