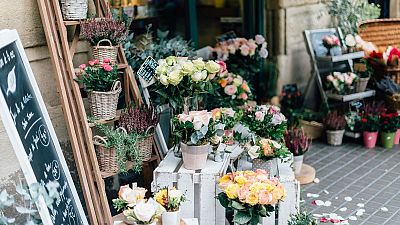 The Chelsea Flower Show kicks off this week in London, featuring the latest in horticultural design and jump-starting the social season. The event showcases the world’s finest blooms, and inspires thousands to go green-fingered and expand their own collections of flowers and plants.

These independent florists are bringing sustainability to their designs with a mix of local, organic and responsibly sourced decorations.

On the outskirts of Paris, the Boutique Pompon prides itself on being chic and urban as well as sustainable.

It sources from growers as close to its Montreuil shop as possible, favouring those plants which are in season locally in bid to limit water and energy consumption. The paper wraps and plant pots that house its floral creations are from small, local French producers where possible.

Just outside Edinburgh, Keeping the Plot grows all its flowers according to organic principles and give back to the environment. By constantly improving the soil health of the its growing areas, it encourages more biodiversity and a healthy population of microorganisms, making for a better habitat for local wildlife.

It grows an ever-evolving range of annuals, perennials, bulbs and woody shrubs, meaning the selection of on offer is rarely the same month to month.

Floral designer Mark Grehan has made an Irish stately home his canvas, putting together blooms that pull the eye from interior to the garden seamlessly.

He specialises in wildflowers, earthy tones, bursts of colour and seasonal plantings which he says “symbolise the beauty in balanced asymmetry”. Such the demand to replicate the stately garden that The Garden has its own online shop where you order some stately luxury into your own home.

This husband and wife team from the UK now own a flower farm and florist in Lagoa, Portugal.

Their flower farm on the Algarve specialises in growing seasonal flowers and blooms, many of which are not usually available in Portugal. Suzannah's Flowers uses these to create signature bouquets and flower arrangements, known for colourful blooms with low mileage.

In the centre of Berlin and creating displays for some of the city’s most iconic destinations, Blossom by Haus Klinik is a masterclass in urban chic. Its main aims are to brighten lives across the city and provide sustainable plants at affordable prices.

The florist even runs workshops where you can go and create your own macrame pots with local materials. It all links in with its sustainable ethos, meaning even the most exotic plants will be grown in European greenhouses, using geothermal heating and solar electricity.