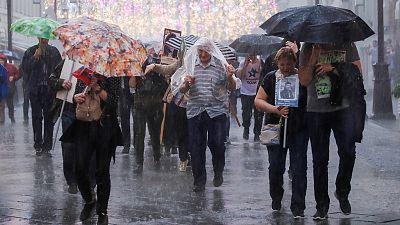 Last month was the second warmest April on record, with above average temperatures over most of the globe.

In Iran and other parts of the Middle East, the unusually wet spring caused continued flooding. Southeastern Siberia, central and eastern Europe were drier than average.

The warm and dry conditions increased the likelihood of wildfires that swept through Trans-Baikal region in Russia, parts of Sweden and the UK.

Mozambique was hit by the second devastating cyclone in two months. Dozens of people lost their lives, and more than 20,000 have been left homeless.

The melting of land ice and thermal expansion of the ocean led to a continued rise in sea levels, threatening coastal communities around the world.

Over the last 25 years, global sea level has increased by about 8 cm.