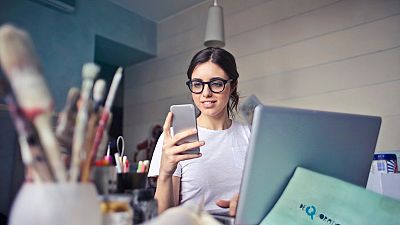 Screens are a problem. We spend on average almost nine hours each day in front of digital devices - I’m on two right now. All of these screens emit blue light, which, when we’re exposed to it for prolonged periods of time, can be detrimental to our health. Blue light encourages alertness during the day, but after a long day staring at emails can affect your circadian rhythm, leading to poor sleep and the health problems this causes: reduction of melatonin, loss of focus, muscle pain, depression. The list goes on, and the collection of symptoms together is becoming known as Computer Vision Syndrome (CVS).

Cutting down on screen time is the perfect remedy. However, if, like me, you’re chained to your computer desk like some sort of corporate dancing bear, there are other ways to mitigate for the problem. Barner eyewear was founded by Eduardo Gaya and Ramón Perez, two men involved in the start-up and wider tech industry, to address the blue light problem. Each pair of Barner’s glasses are coated with a special blue light blocking formula to combat the rise of CVS, while the frames actually look good as opposed to you sitting in your office wearing some sort of anti-light goggle.

We talked to co-founder Eduardo Gaya about the inspiration behind Barner and why employers should take screen exposure seriously.

How did you first come up with the idea? When did you realise the modern world had a problem with blue light?

“Nowadays any workplace is full of screens, not only the ones we have in our laptops but the external monitors we use, meeting rooms, phones, tablets, etc. I realised I was living surrounded by screens and feeling some of the effects of this overexposure to blue light myself. I used to use eye drops to hydrate my eyes because around 6- 7pm, my eyes were feeling tired, itchy and with some redness. The drops worked, but I always had the feeling that it was not enough.”

“One day going through the engineering building at my workplace I saw some people wearing yellow-tinted glasses that I never seen before. I asked a friend what they were for and he told me they were computer glasses. This was kind of the light bulb moment. I thought that it was an amazing idea, but we should create glasses for everyone to wear in their workplace with a great design, not only targeting developers, but targeting everyone that is in front of their laptop for more than three hours per day.”

With your past in companies such as Samsung and Google, did you see Computer Vision Syndrome regularly?

“Yep. I think many people suffer the effects of sitting in front of screens for the whole day. At the time I didn't know what CVS was, but when I started investigating it, I shared this with many of my colleagues and many of them said they were feeling the symptoms. To validate the idea we did a survey of 400 people, and 85 per cent of them felt the symptoms of CVS.”

Do you think companies should do more to look after their employees’ eyes?

“Totally! I think lot of companies are already taking care of the wellbeing of their employees, in many different ways such as gym, massage, good chairs, good food etc. Helping them block the blue light of their digital devices to improve their wellbeing should be a no-brainer for them as well.”

Since you began wearing the glasses yourself, how big a difference have you seen in your health?

“I felt a huge difference. Once the idea came up, I went to an optician and I asked for some blue light blocking glasses - that cost me 300€ . The difference was so obvious that I stopped using eye drops, I could stay longer working in front of my laptop, was more focused and my eyes were much more relaxed. After testing this for myself for a few months, we thought we should create a cool brand of computer glasses, with the highest quality CR-39 lenses and a great design.”

You're donating a portion of each Indiegogo pledge to charity. Is sustainability an important aspect to the production of your glasses?

“For us it’s really important to give back to society. We were born thanks to the crowd. We are super thankful, because without the support of the backers, Barner wouldn't exist right now. This is why we thought it is essential to give back to all of them, and on this campaign we’ve already planted 4,211 trees in California, donated $937 for the investigation of auto-immune diseases such as lupus and influenced the regeneration of 3,200 acres of infertile land.”