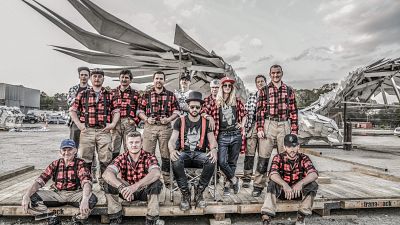 Although he was only born in 1984, Hungarian Gábor Miklós Szőke is already a prominent artist of the contemporary sculpture scene in Budapest. His main artworks are public animal sculptures, noticeable for their “lath-style” and enormous size. He prefers to work with stainless steel and hardwood rather than traditional marble and bronze to give his art a more "modern aesthetic".

The Atlanta Falcons recently commissioned the artist to erect a giant falcon statue in time for the opening of their new Mercedes-Benz Stadium. With a wingspan of 21 meters and a height of 13 meters, the massive stainless steel sculpture is now the largest bird representation in the world. “Calossus” in Samorin is the largest equine statue in Europe. Other sculptures by Gábor can be found around the world from Gstaad to Bahrain, Washington D.C. to Nizhny Novgorod.

It’s not a surprise Hungarian media call him “Hungary’s coolest export” and that he made it into Hungarian Forbes Magazine’s “Top 10 under 30” in 2015, or that he has received numerous national and international awards. Despite all the success at such a young age, Gábor never forgets that his sculptures are not just about instantly recognizable shapes and sheer magnitude.

We sat down with him and Berta Hauer, his manager and partner, in their impressive studio located inside an abandoned factory in the south of Budapest, which won the design office of the year award in Hungary in 2016, to ask what's the message behind his art.

When did your interest in art and sculpture begin?

"I’ve been involved in crafts since childhood. I always drew a lot and made little sculptures. Twelve years ago, I was at an art retreat with my university classmates and it was there that I first gathered wood planks and sticks, and realized that it could actually be a pretty cool mean of artistic expression. It’s almost like drawing things in space whilst enabling you to make massive art pieces. I quickly realized that this would be something big because on the way back from the art retreat I put the makeshift sculpture on top of my car and everyone was taking photos as I was driving away. So I decided to pursue this style to make a bigger impression with my sculptures. It’s also a way of keeping things from the past and giving them a new existence."

What are the sustainable methods and practices you employ in your art?

"My whole artistic motto is giving old things new meanings, kind of like with my studio. Back in its glory days, the Manfréd Weiss Steel and Metal Works here in Csepel was the second biggest in Europe. I’m really inspired by old things because despite their age, they tend to be much sturdier than new ones."

"Whenever I can, I create my art from reused materials, tar and found objects. Ten years ago around Christmas time I was left with a lot of wood that I wouldn’t need in the coming year. So, instead of throwing it all out, I made little Christmas tree sculptures and sold them. Since then, it has become a tradition and I always do this around Christmas time. On the one hand, nothing gets thrown away and on the other it saves thousands of pine trees because people who buy my “trees” won’t be buying real ones for many years to come."

"Environmental awareness in general is something that is very important for Berta and myself. Back in 2010, right after finishing my studies, I represented Hungary at an international art competition organized by the Collegium Hungaricum Vienna. The theme was the Danube River. Unfortunately, “civilization” has decimated the once vibrant river and turned it into an oily, contaminated smudge. In the Danube River, the sturgeon is on the brink of extinction. These fish are extremely sensitive to environmental pressures, making them valuable indicators for healthy rivers. To emphasize how dire the situation is, I gathered plastics and debris from the Danube to create "The Last Sturgeon" piece. These materials, the manner of formulation, the fish’s fractured skin – all this refers to its unnatural way of perishing and calls on the viewer to take greater responsibility for our hitherto negligent attitudes towards the species that share this planet with us."

Social responsibility in general is of great importance to you. What are some of the most pressing causes for you currently? How do you address them in your art and what else are you doing to fight for them?

"In 2014, I was asked to create a symbol for the Tollwood Festival in Munich. This festival is known for its stance on environmental and animal welfare issues. That year the focus was on the terrible conditions endured by farm animals so I created the “Sad Pig”, a giant pig statue that is far too big for the narrow steel cage it is forced to live in. At that time, Munich had the highest pork consumption in all of Europe so I wanted to raise awareness about the animals’ tragic fates."

"Also, I try to do what I can for disadvantaged and minority communities here in Hungary. In 2012 I took part in the charitable Hello Wood art camp. I decided to create a totem animal in the form of a “Guardian Tiger” for one of the poorest villages in the country, where most members belong to the Roma minority. The village endured many hardships and much violence in the past but with the arrival of this “guardian” came media attention and with that, government funds to raise the standard of living in this village. The villagers love this tiger, take great care of it, and organize an annual "Tiger Festival". Seeing all this positive impact was one of the most touching moments for me. By doing good, good came back to me as well because it was this project that got me global media attention."

"After the “Guardian Tiger”, the authorities of similarly disadvantaged locales started to get in touch with me to brighten up the lives of their citizens through art. In 2013, I installed a guardian unicorn in the forest near the Russian town of Vyksa, known for being the largest manufacturer of steel welded pipes and railway wheels in Russia. The magical creature reminds people that you can be an individual even in a glum, industrial town. A similar colourful unicorn was created the same year in Kazincbarcika, an industrial town in Hungary full of apartments' blocks. Locals really love this unicorn and plant pretty flowers on the roundabout on which it’s located. I even think that one year it won the country’s 'Prettiest Roundabout' award!"

"I find it very important to improve the visual culture of kids so that the coming generations know how to appreciate and preserve beauty. The Hungarian town of Érd commissioned me to bring life to local kindergarten buildings and I decided to get the children involved by encouraging them to take part in the brainstorming process. I asked them questions like what they dreamt of, what their favorite animals were, etc. and together we created friendly animals all around the kindergartens."

"In general, I believe the sculptures in public spaces affect people’s lives no matter where they are. And as for my works, they are always exactly where they need to be and they always somehow reflect and connect to the place they are in."

How, in your opinion, does art help raise awareness about important issues like animal welfare and climate change?

"In terms of PR and communications, you can do a lot of messaging. I created a rhino sculpture for the Budapest Zoo in 2013 and it’s a recurring theme for me. Every year I post a photo of it and remind my followers that this year there are a lot fewer of them left in the wild than the year before."

"I try to stick to the animal theme not only because they’re a cool shape but because there’s an underlying message I usually want to get across with each work. Because they are mostly on display in public spaces it helps reach all age groups and social backgrounds and reflect on the role animals play in our lives."