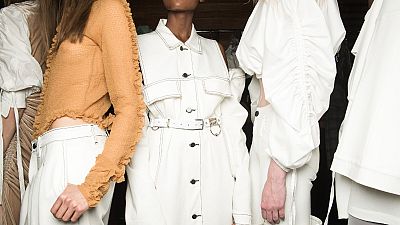 As Fashion Month draws to a close, the industry becomes more introspective.

A new season and a shifting of fashion’s tectonic plates presents a marker by which to measure progress, raising questions such as, where were we this time last year? What advancements have we made socially, ethically, politically, and commercially? And (hopefully) most pressingly of all, what more is there to be done?

While advancements in fashion’s diversity stakes should be celebrated, it’s worth taking them with a healthy dash of salt. Historic firsts, such as Claudia Li’s all-Asian model cast for SS19, or Sudanese megastar Anok Yai becoming the first black model to open for Prada in 20 years, are just that – historic firsts to be praised but viewed in the wider context of an industry where BAME and LGBTQ+ communities, along with any body type other than a sample size, are woefully underrepresented.

When we champion brands for increasing the diversity of their runway models by a marginal percentage, we need to interrogate ourselves and examine the bigger picture. In a landscape of buzzword-wielding, how do we differentiate token gestures from meaningful change?

So, what is worth celebrating? Read on for our pick of fashion’s diversity-focused news stories as we move into Spring-Summer 19.

Self-assessment isn’t fool-proof, but increasing acts of self-regulation and enquiry are helping to shine a light on the inner-workings of the industry and highlight areas for improvement. Last month, non-profit organisation Council of Fashion Designers of America – an initiative which assesses, replenishes and promotes the advancement of American fashion – published a comprehensive ‘Insider/Outsider’ report focused on the creative and ethical case for inclusion and diversity in fashion. Within are stats, industry forum findings and statements from industry leaders.

In a questionnaire sent to approximately 50 executive-level attendees from over 30 fashion companies, results showed that 62% of respondents rated their organisation’s commitment (or lack thereof) to an inclusive workplace as a 3 out of 5, when considering the impact to the success of the organisation. Erica Lovett, manager of Inclusion & Community at Condé

Nast called for greater diversity in the commercial realms of fashion.

“Visibility alone is not the solution,” she says. “The industry must recognise and prioritise efforts to support greater diversity on the business side: the financiers, the chief executives, the heads of fashion houses, the senior level magazine editors, and business leaders.”

From high street to high end, gender-fluid fashion is on the rise

Gender-fluid fashion has never had such a strong footing in the fashion world. Whether it’s high street offerings, such as H&M’s collaboration with cult footwear brand Eyts or ASOS’ own-brand label Collusion, or luxury brands such as Balenciaga (see picture below) playing with gender-neutral symbolism for their Resort SS19 collection, we’re seeing increasing efforts to push into a gender-fluid territory.

The SS19 runways were widely reported to be the most racially diverse ever, with New York coming out on top (44.8 percent of models were women of colour, a 7.5 point leap up from AW18’s 37.3%), followed by London (36.2%) and Paris (32.4%) of all castings across New York, London, Milan and Paris went to models of colour – that equates to two in every five models being people of colour.

Amsterdam-based fashion platform Fashion United reported that women of colour also dominated the list of most-booked models, with South Korean Yoon Young Bae and Dutch Kiki Willems tied at the top of the list. Based on stats like these, it’s likely that we can expect to see another healthy increase in Fashion Month’s diversity stakes for AW19.

A landmark event for plus-size fashion took place earlier this month when plus-size brand 11 Honoré opened New York Fashion Week night with a show at Spring Studios in TriBeCa. Featuring designs by Ryan Lo, Adam Lippes, Tome, Cushnie and Azeeza among others, the collection was worn by curve models such as Tara Lynn, Marquita Pring and Candice Huffine.

In a landscape of sample size silhouettes, it was a bold and celebratory statement – and a rallying cry for industry leaders and taste-makers to follow suit. Special guest, actress and transgender activist Laverne Cox, commented: “What an incredible honour to close @11honore’s first fashion show with these incredible women who represent the size diversity of the women of America.”

Some of the most exciting emerging brands around right now are pioneering fashion inspired by drag and queer culture. One such talent is Cypriot designer Vasilis Loizides, whose SS19 collection (think intricately spliced longline coats, scalloped hem crop tops and cut-out details) draws on drag culture and Lozides’ Greek-Cypriot heritage.

Another is rising Georgian designer Akà Prodiàshvili, whose androgynously styled big-cat print cocktail dresses and lacquer-look vinyl bodysuits are both an ode to Tbilisi’s young queer community and a bid to tear down conservatism.