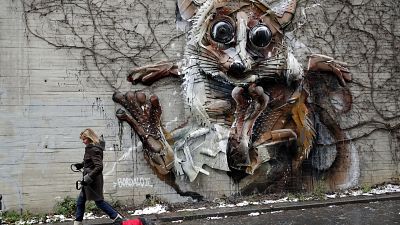 From damaged car bumpers to industrial bin lids any waste turns out to be art in the hands of Portuguese street artist Bordalo II.

He already invaded the streets of 23 countries with his portraits about endangered animals, made "with the materials that kill them, namely plastic and the pollution that goes with it", says the artist.

He strongly believes that "one man's trash is another man's treasure".

"About the things we cannot use again, for example, back in the studio, we never throw anything away. We just keep everything and what happens is that even materials we think we will never work with, it happens that two years later or something, we'll look for it and we'll find a project we can use for it. I think that's very interesting and it works because we have a huge place but everything may have a second life, for example, the spray cans, it's metal, so it's something that's easy to recycle", added the artist.

His next exhibition called Accord de Paris (Paris Agreement) is a nod in the direction of the 2016 Paris Climate Change Agreement and aims particularly to educate the younger generation on the devastating impact of globalisation on biodiversity with his eye-catching, brightly coloured sculptures and portraits.

Click on the video above to see his art pieces on the streets of Paris.

Researchers dress horses up like zebras in the name of science