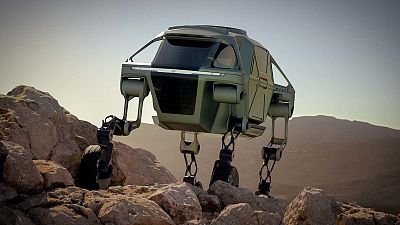 It looks like a cross between an insect and a space ship — Hyundai's revolutionary new vehicle concept is designed to climb terrain other vehicles can't. There's even hope it could one day end up on Mars.

The "Elevate" was unveiled at the CES technology show in Las Vegas. David Byron is the Industrial Design Manager at Sundberg-Ferar, the company that's been working on the Elevate concept with Hyundai for almost three years, calls it the "ultimate mobility vehicle".

"A vehicle with legs could drive first responders to a location like any traditional vehicle, but then walk or climb over treacherous terrain to directly reach the injured," he explained.

John Suh, Vice President of Hyundai's Center for Robotic-Augmented Design in Living Experiences (CRADLE), has incredibly ambitious plans for the vehicle: "I like to imagine that one day we'll send crewed missions to the moon or Mars and when that day happens the 'Elevate' will be a fantastic way to send a whole new generation of explorers to do science and discover those places," he said.

Click on the video above to learn more about the futuristic vehicle.