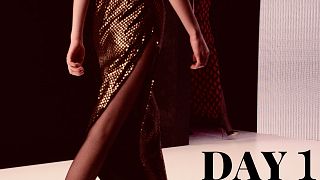 Compared to Christian Lacroix, Christian Dior, Pierre Cardin and Yves Saint Laurent by the international press throughout his career, Slava Zaitsev is the ‘godfather’ of Russian fashion. Celebrating his 80th anniversary this year and official retirement from the industry, he naturally opened the Moscow fashion week that began today, 10th March.

And what an introduction! The show featured all the Russian women - real and idealized - from the traditional image of a countryside girl with a headscarf and an ample folk coat to the the all-fur and pearls, overly sophisticated lady who lunch. The final was a series of goddesses wearing contemporary kokoshnik, the Russian traditional headdress, with cascading black and pink flowers.

That’s because Zaitsev has seen and dressed them all. First gaining fame for his garments destined to Kolkhoz workers - collective farms in the Soviet Union - he soon turned into couture, dressing first ladies (from Raisa Gorbachova to Lyudmila Putina) and celebrities throughout the second half of the 20th centuries.

However, the fashion scene per se is relatively young in Russia. It emerged when the USSR collapsed in December 1991 and started to develop a decade later with the birth of Fashion Week Russia, now Mercedes-Benz Fashion Week Russia. An event sparked by Alexander Shumsky, the director of the Russian Fashion Council.

"In the beginning, there were 18 to 20 fashion designers and they were hard to find" he recalls. "Now, we have over sixty of them and forty thousand people are expected to attend over the course of the five days of fashion week."

Popular also with the international press and successful Russian designers themselves. "Some designers started to work internationally like Julia Dalakian with Roberto Cavalli, but she has shown her own collection here at Fashion Week Russia since the first edition and continues to do so. It’s quite remarkable!" he adds with a smile.

A showcase of Eastern creativity and new fashion talents

Popular with neighbouring countries as well such as Kazakhstan, which Fashion Week happens on one of the runways of the venue. France-based Ukrainian designer Yasya Minochkina’s interpretation of a contemporary Lady Didi was particularly on-point and in line with current Western fashion.

She mentioned being also very inspired by Meghan Markle, which reflected in her collection of embroideries, one shoulder dresses, and sharp silhouettes that resonated with both Princess Diana and the future British royal.

"I also wanted to pay an homage to 90’s fashion when designers were shooting models in crazy sparkling outfits with snakes. As a result, I used nineties signature python leather but in a modern ethic way: as prints on fabrics,” she stated in her press release. The latter is partly hand-painted and fully desirable.

Closing this first day of Fashion Week, Arut MSCW’s show got a standing ovation. We had a chance to catch up with the Russian designer.

Don’t be fooled by appearances. Arut Arustamyan may be young but he has come a long way. From London to Paris, Milan, Florence and now Moscow, the twenty-seven-year-old Russian designer has been building a solid career for the past 10 years, before successfully launching his eponymous label, ARUT MSCW, in 2016. He is showing his new collection at Mercedes-Benz Fashion Week Russia for the first time. Glancing at his CV we caught the names Central Saint Martins in London, followed by Istituto Marangoni - to get the “ Italian point of view” as he puts it - and 20th century old Maison IRFE historical fashion house in Paris, where he worked for more than a year.

Q2. What material do you like working with the most?

“Sequin! Lurex! Anything that can get your inner shimmer out!”

Q3. What are the general spirit and highlight pieces of your A/W 18-19 collection?

3 Questions to Vladimir Filippov, Deputy Head of the Moscow Department of Culture

Q1 What does fashion represent in the Culture sector in Russia?

It is very important for Department of Culture to support young talents as they clearly understand that how citizens are dressed and look is an integral part of our culture.

Q2 How do you support the fashion industry in Russia?

Russian Fashion Council and Museum of Fashion present Futurum Moscow, supported by Moscow Department of Culture and Museum of Moscow, as the part of Mercedes-Benz Fashion Week Russia. Today young Moscow designers and brands are presenting their new collections in Museum of Moscow. This is the second time for FUTURUM MOSCOW and there is almost twice bigger amount of designers comparing to the previous season. The first edition of FUTURUM MOSCOW was on 26 of October 2017 and there were 14 fashion shows and 2 presentations. This year there are 23 fashion shows and 3 presentations. There were 4500 visitors for one day.

Q3 How do you see it evolving in the future?

I think Futurum Moscow became an important ground point for young designers. There are many progressive clothes. We organized this event as future-oriented in every sense of the word. Oksana Fedorova (the director of Museum of fashion) believes it is critical to support young designers, to let them demonstrate their work. On the first season in 2017, we invited street art painters who created fashion artworks along with a showcase. This time ARTIS Project by Anastasia Potanina has arranged an art exposition on the urbanism aesthetics as a part of FUTURUM MOSCOW.

That is all for today! For more exclusive images of our first day inside Moscow Fashion Week click on the video above and connect with us on social media using our #livingit. Day 2 is coming soon!