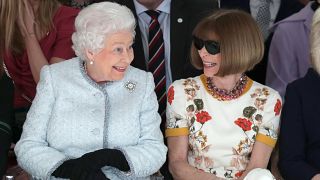 The monarch made a surprise when she appeared at British designer Richard Quinn's show on Tuesday.

After watching the provocative show in the front row with Vogue Editor-In-Chief Anna Wintour and Chief Executive of the British Fashion Council Caroline Rush, the Queen presented the inaugural QueenElizabeth II Award for British Design to Quinn.

He is a recent fashion graduate of Central Saint Martins who started his own label in 2016 and has quickly earned recognition as part of the next wave of talented young British designers. Quinn was chosen for the prize by the British Fashion Council.

Richard is an emerging talent who studied at Central St Martin's in London and has been recognised for his exceptional prints. He received his award from The Queen this afternoon @LondonFashionWk#LFWpic.twitter.com/LjXRkRAS4y

His provocative show included a model wearing what looked to be a decorated green motorcycle helmet with a dark visor along with black and white polka dot leggings and a gauzy top with different size dots.

The queen took to the catwalk to address the crowd and praise Britain's fashion heritage.

British fashion industry has quite some support from the Royal Family, earlier this week, Kate Middleton and the Sophie, Countess of Wessex host the Commonwealth Fashion Exchange Reception at Buckingham Palace.