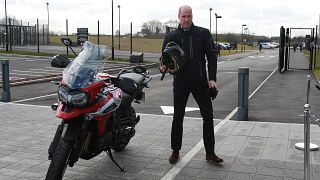 Britain's Prince William indulged his love for motorbikes on a visit to the country's biggest motorcycle factory on Tuesday (February 20).

The Duke of Cambridge was test driving a motorcycle at the headquarters of Triumph. William took a Triumph Tiger 1200 motorbike for a quick ride.

On his trip to the Midlands, the royal also visited a MIRA Engineering Tech Park in Nuneaton where he checked out military vehicles, motorcycles and took an Aston Martin DB11 sports car around a high speed, wet circuit track for three laps.

The duke previously admitted that he had put his passion for motorbikes on the back-burner because of his growing family. Prince William and his wife, Duchess of Cambridge Catherine Middleton, are expecting their third child in April.