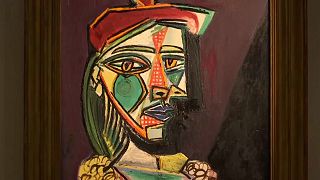 Pablo Picasso's 'Woman with a Beret and a plaid dress' is the highlight of the next Impressionist and Modern Art auction in Sotheby's Auction House, London.

The work debuted in Hong Kong on Tuesday.

The portrait depicts Picasso's muse Marie-Thérèse Walter and is the first time the work has emerged onto the market. It is estimated to be valued at up to 40 million euros.

Painted in 1937, the work was created in the same year as Picasso's great masterpiece 'Guernica'.

After Hong Kong, the works will continue to tour the region in the hope of catching the attention of a prospective buyer.

Ms Wong added that: "Sotheby's has been bringing highlights from our New York and London impressionist and modern art sales to Hong Kong for preview for the last 20 years. We've seen a steady growth in terms of buyers and their interests ... last year in November's New York sale out of the top ten highest lots five were purchased by Asian clients."

"Woman with a Beret and a plaid dress" is on display in Hong Kong from the 30th January to the 2nd February and Taiwan from the 6th-7th February.

The works will go on sale at Sotheby's in London on the 28th February.