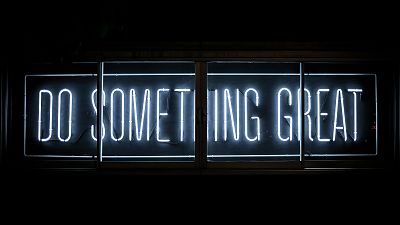 “Activism” officially peaked as a buzzword this year, for good reason. But did you know that millennial men are 15 percent more likely to call themselves activists than millennial women are? What makes this baffling: 74 percent of nonprofits are led by women, so there is no shortage of activist role models out there for women and girls.

So, if you need a few reminders on how to get started as an activist, or need a refresher course on how to become even better at it, no fear: We’ve turned to the experts who gathered at the She’s the First Summit to get their best insights.

It doesn’t have to be a huge event. “Not every protest has to be the size of a women’s march,” says Jessica Bennett, author of Feminist Fight Club. Don’t underestimate the power of continued, small actions to change your community. It’s sustained action that helps to change minds over time. While showing up and taking up space in person at demonstrations always sends a strong message to legislators, so does volunteering, engaging in thoughtful dialogues online or at the family dinner table and calling your local rep over lunch hour.

Search out other perspectives. “Pass that mic,”says Blair Imani, African-American Muslim Activist and Civic Action & Campaigning Lead at DoSomething.org. When it comes to activism, one voice can’t take on every issue. Make sure you’re inviting other perspectives to the table, even when you’re not the official organizer. If you’re in the room, you’re in a position of privilege and can lift others up. Are you at an event where all the attendees look like you? Did a conference book speakers on a panel who all share similar backgrounds? Speak up. Offer them a list of qualified people they could invite who offer diverse perspectives. Ultimately, it helps you to create a more authentic message and movement.

Use listening as its own form of activism. “By showing up and having an open ear, [you can then] use your privilege, or your gender or your race to speak up” on behalf of marginalized groups, says Amanda Gorman, the first-ever Youth Poet Laureate of the United States. As a follow-up to passing the mic, be an activist by listening to others with different backgrounds — and using what you learn from them to inform the actions you take and the messages you spread to your network.

Tell stories with empathy. Amy O’Leary, Upworthy and GOOD’s Chief Story Officer and Editorial Director, said stories are one of the best tools we have to make the world a better place. “Meaningful stories help people feel better, hopeful and more connected to others. The closer we feel, the bigger difference we can make.” Whether you’re giving a speech, publishing a Facebook post or making a video, think about how you can help people connect not just with statistics and facts, but with human faces who are affected by the policies and inequalities.

Understand the world to understand what’s happening at home. “Dive deep into global issues each month and become an active global citizen,” says Katie Riley, Programs Manager of She’s the First. A huge part of activism is just knowing what’s going on in the world and understanding how to apply that to your local communities, and vice versa. At the She’s the First Summit, Riley launched the STF Action Network, a mobile-friendly platform that walks you through a monthly issue — like intersectional feminism — links you off to a few expert pieces of content, and leads you to five possible actions to take, from posting on social media to hosting a documentary screening, be it with roommates or your entire community.

It’s not about you. “The point of activism is not to become that one person that everyone goes to,” says Nelli V. Agbulos, Co-Founder of ARTivism Galleries. If you’re an organizer, make sure you give people in your community the tools and autonomy to take action, with or without you. That way, if you have to dial back because life gets crazy, what you’ve built won’t crumble. Laying the groundwork for activism means building a community of people who can all work together on important issues rather than creating a cult of personality around one person — it’s how everything keeps running and replicating, long after you’re gone.

Get over feeling you have to be perfect and know everything. “Activism is not a circle — it’s a lot of squiggly lines on a piece of canvas,” says Agbulos. In other words, you don’t have to feel like you know everything about an issue to speak up for what’s important and needs to change. A true activist is always striving to learn and understand more, as the world continues changing. That means occasionally you’re going to misspeak. When you do, listen to the opposing argument, understand where they’re coming from and update your position as needed.

Own your activist identity. The world needs more of us out there!

Christen Brandt and Tammy Tibbetts are the Co-Founders of She’s the First, a nonprofit fighting gender inequality through education by supporting girls who are the first in their families to graduate from high school and by training students everywhere to be global citizens.