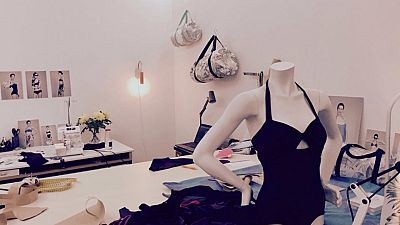 The rise of fast fashion has increasingly distanced the fashion supply chain from a European context, with textile and garment production being dispersed to many locations in developing countries, as companies compete to find ever-cheaper sources of labour.

The geographical distance can also translate into a separation from the values, ethics and sometimes also tastes of consumers in Europe.

Furthermore, workers in the textile and garment industry are often isolated from the customers they serve. Invisible and lacking the power to challenge and change the conditions that they are forced to work in.

In an effort to reclaim control over the fashion supply chain, some Berlin fashion designers are bringing textile and garment production back to the German capital.

It starts with producing and purchasing fabrics made in Europe, which are higher quality, but more expensive. Bonnie & Buttermilk, a designer duo based in Berlin Mitte, purchase high-quality, durable fabrics from German and Dutch retailers, as well as occasionally from Asia.

Eike Braunsdorf, one of the co-founders, confessed that the very decision to create the brand stemmed from the inability to find the exact patterns and colours for the fabrics that she and her cofounder wanted. This led them to decide to draw them by hand and get them printed in Germany in small quantities.

Bonnie & Buttermilk’s fabrics have an ecological label. But, in the competitive world of fashion, costs remain and compromises are still necessary.

Eike explaines that she does not use organic cotton because “fabrics that get printed in Germany are so expensive that, if they were bio [organic], they would cost twice as much, and it would be even harder than it is already to produce in Berlin and compete with always cheaper clothes from big labels.”

She emphasised that her clients appreciate the fair production and know that comes at a cost.
Another Berlin-based brand, 1979, also sources all its fabrics for small editions of its bathing suit collections from within the European Union, while carrying the ‘Oekotex Standard 100’ certificate.

Suzanna Kuhlemann, the founder, uses three suppliers, two French and one Italian, to obtain high-quality swimwear fabric, linings and notions that are very durable and tested in saltwater and chlorine. The line is manufactured in Chemnitz, a German city, making it exclusive and expensive and therefore a product not compatible with the mass market or mass production.

Similarly, Sadak , a local designing company producing high-end edgy streetwear, gets most of its fabrics, which are 80 percent organic cotton, from Italy and Germany.

These locally-producing fashion brands also work independently of the typical industry-cycles. Sadak, for instance, creates limited editions of clothes for each collection every season. This means they do not overproduce, and sell the clothes in multi-brand shops across the world.

Sadak also offers customised designs for its biggest clients, which include Rihanna and Tyga. The label also found a new market making clothes for the second edition of the The Hunger Games film franchise.

In the same vein of adaptation, 1979 has a line of continuous styles that are offered in addition to new, seasonal or limited edition colors. These permanent styles are improved each year, the patterns are fine-tuned and optimised based on feedback regarding feedback from clients over the last year. New styles are integrated into the permanent collections based again on their popularity.

Due to the production costs in Germany, these alternative fashion companies tend to have few employees, who, however, benefit from the labour protections and laws imposed in the European Union.

Saša Kovačevic , the Serbian-born creator of Sadak, explained that his company currently employs two workers on a freelance basis in the studio, who get paid between €1,500 and €3,000 for two-weeks’ work.

The team at the 1979 factory consists of a seamstress who does the cutting and ten others focused on sewing. They receive their salaries directly from the manufacturing company, which gives them a regular contract including all benefits and performance based-pay guaranteed to always remain well above the minimum wage.

The working hours are from 6/7 until the early afternoon. All the staff have been working there for more than 10 years.

Despite labour and production costs, there are some key advantages to relocalising production. Suzanna from 1979 emphasised communication in local in-country production is easier, ensuring fewer mistakes as well as easier logistics, shipping, customs and legal matters.

She added: “The greater significance is the transparency that comes with it and that you can much easier actually see and verify that you have the fair conditions you want. And what is most important to me: you have a clear conscience, knowing that you have made a good decision socially and ecologically and can fully stand behind your product.’

According to Eike from Bonnie & Buttermik, another advantage is that local production is very fast. Her brand is able to produce a piece of clothing in two days whenever the customer needs it, while also being able to offer bespoke services.

For Saša, the main advantage of producing in Berlin is seeing and touching the product during the entire process. He emphasised that he prefers having control over applying prints and patterns together, since a company somewhere else in the world might not be able to do the way he prefers.

All this is paid for in prices that can be 100 percent higher that foreign sourced products. This makes it especially difficult for smaller labels.

Suzanna stressed: “Many times the sewing price is so high, that a product is too expensive to be sold wholesale in other stores, because their margin again is so high, that the item turns out up to 30 percent higher and this often is decisive in the customer´s decision, making it harder for the label to stay profitable.”

Given the higher price tag of the items, locally-producing companies remain a niche industry, whose clientele are made up almost exclusively of wealthier consumers.

According to Suzanna, her buyers consist mainly of women in their thirties and forties, who “are well travelled and interested in world affairs, a healthy and sustainable lifestyle and fashion, and who have found their personal style, appreciate quality and care about the origin and making of the products they use.”

All the producers remain confident in the business sense behind their decision. Eike points out that as more people are changing their consumption patterns by “buying less and focusing on special products made in a fair manner,” the target audience of locally-produced clothes will continue to broaden.