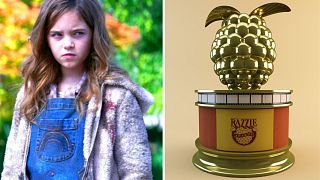 When a mean-spirited wrong becomes a belated right…

As reported earlier this week, the satirical anti-Oscars awards organization Razzie Awards - formerly the Golden Raspberry Awards, who celebrate the “worst” movies of the year - caused a stir by nominating 12-year-old actress Ryan Kiera Armstrong for Worst Actress for her performance in Firestarter, the remake of the 1984 film based on Stephen King's novel of the same name.

Armstrong, who also starred in It Chapter Two, Black Widow and The Tomorrow War, was 11 at the time of filming Firestarter.

In the wake of widespread criticism, the mean-spirited decision has now been overturned.

In a statement, Razzies founder John Wilson apologized and confirmed Armstrong’s name has been removed from the ballot.

Additionally, the Razzies are introducing an age-limit for nominations. Going forward, the joke awards stated that under-18s would not be eligible to be nominated for awards.

Among those criticizing the decision to nominate Armstrong was fellow child actor Julian Hilliard, who appeared in WandaVision and Doctor Strange in the Multiverse of Madness: “The razzies are already mean-spirited & classless, but to nominate a kid is just repulsive & wrong. Why put a kid at risk of increased bullying or worse? Be better.”

In a statement, Wilson called the criticism “valid.”

We also believe a public apology is owed Ms. Armstrong, and wish to say we regret any hurt she experienced as a result of our choices.

Read his full statement below:

Sometimes, you do things without thinking, Then you are called out for it. Then you get it. It’s why the Razzies were created in the first place.

The recent valid criticism of the choice of 11 year old Armstrong as a nominee for one of our awards brought our attention to how insensitive we’ve been in this instance. As a result, we have removed Armstrong’s name from the Final Ballot that our members will cast next month. We also believe a public apology is owed Ms. Armstrong, and wish to say we regret any hurt she experienced as a result of our choices.

Having learned from this lesson, we would also like to announce that, from this point forward, we are adopting a Voting Guideline precluding any performer or film-maker under 18 years of age from being considered for our awards.

We have never intended to bury anyone’s career. It is why our Redeemer Award was created. We all make mistakes, very much us included.

Since our motto is “Own Your Bad,” we realize that we ourselves must also live up to it.

As rubbish as the awards are, at least they’re taking accountability…

That said, the change in voting guidelines is long overdue, as numerous child actors have been previously nominated for Razzies.

Previous nominees include Macaulay Culkin for three performances (Getting Even With Dad, The Pagemaster, and the - whisper it - underrated Richie Rich) in 1995 at the age of 15, and Jake Lloyd for Star Wars: Episode I – The Phantom Menace when he was 11 years old.

Lloyd later said the bullying he received, both from classmates and the press, prompted him to leave acting for good.

Director Chinonye Chukwu calls out Oscars as misogynist and racist