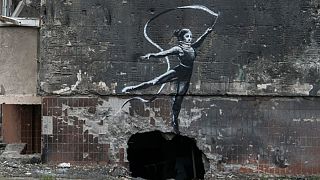 Wearing a neck brace, a rhythmic gymnast performs in a new Banksy piece painted on the wall of a residental building in Irpin, Ukraine   -  Copyright  Maxym MarusenkoNur PhotoGetty Images
By Jonny Walfisz  •  Updated: 26/01/2023

A collection of Banksy replicas has gone on show in Russia, despite political opposition by the anonymous artist.

The St. Petersburg exhibition contains 150 replicas of Banksy’s work and has quickly become one of the city’s most visited places.

The collection is a transfer from the Moscow exhibition “To Find Banksy” that was put together before the Russian invasion of Ukraine began. The organisers have stressed that they don’t want to concentrate on politics.

But trying to keep anonymous street-artist Bansky apolitical is a fool’s errand. All the more so for an unauthorised exhibition of replicas taking place in a country he actively campaigns against.

Since Russia invaded Ukraine in February 2022, Banksy has highlighted the Ukrainian people’s plight. Just this month, he facilitated an auction of 50 screen prints to raise funds for a charity helping civilians affected by the conflict. The auction was cyber-attacked by Russian IP addresses.

The exhibition in St. Petersburg includes full-sized sculptures and entire recreated rooms with replicas of Banksy’s iconic graffiti works. None of the artworks Banksy has made in Ukraine feature.

“I was even wondering whether his last works that are against the special military operation would be here. I think it would be correct to ask ourselves whether we need all this so that we think of it. Banksy suggests many things to us, especially in the new works he did. I even think his new works are missing here. They could have been added,” says Kirill Kovalev, a visitor.

“To be honest, I draw no parallel between political views and art. I think it should be distinguished. Therefore, it's his choice (to speak out against the special military operation in Ukraine),” says Maria Potapova, another visitor.

Banksy already condemned an unofficial exhibition of actual works in Moscow in 2018. The unofficial ‘Banksy’ exhibition opened in Moscow’s Central House of Artist Museum but has since moved through Russia, Spain, Portugal, the US, and Hong Kong.

Over three million people have seen the unauthorised exhibition.

“What the hell is that?” Banksy wrote in a text exchange when he found out.

Banksy responded to the 2018 exhibition in typical fashion, posting just the text exchange.

“You know it’s got nothing to do with me right? I don’t charge people to see my art unless there’s a fairground wheel,” he wrote, referencing his 2015 Dismaland exhibition, a parody of Disneyland, in the UK.

As much as he was against the exhibition, he didn’t take further action as he explains: “Hmm—not sure I’m the best person to complain about people putting up pictures without getting permission.”

Banksy has allowed some of his works to enter Russia more recently though. In 2021, he authorised the auction of eight works including a print of 'Love is in the Air' and pieces from the Dismaland theme park.

Auctioned at the Tver City Museum and Exhibition Center northwest of Moscow, the museum’s Elizaveta Maksimova told reporters: “There are certificates for the exhibits which prove they are authentic and signed by Banksy.”

Check out the video above for footage of the St. Petersburg exhibition.