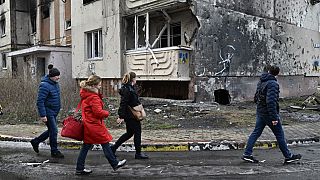 People walk past a Banksy’s graffiti on a wall of a heavily damaged residential building in Irpin, Kyiv, on December 23, 2022, amid the Russian invasion of Ukraine   -   Copyright  GENYA SAVILOV/AFP or licensors
By Jonny Walfisz  with AFP  •  Updated: 11/01/2023

Russian IP addresses have cyber-attacked an auction of Banksy’s work to raise funds for Ukrainian civilians, the organisers claim.

The Legacy of War Foundation, a charity that provides funds for the civilians affected by conflict, organised the auction of 50 Banksy prints for €5,660 each. The prints were of Banksy’s famous ‘Fragile/Agile’ work, which features a white mouse grasping onto a cardboard box, erasing the first two letters of the word “fragile”.

Buyers were limited to one copy of the print each.

“The site received over 1 million requests (and 3,500 hostile attacks from Russian IP addresses),” the foundation explained on its website.

“We would appreciate your patience at this time,” they added.

The cyber-attacks have not been officially linked to the Russian state.

“I’ve made 50 of these screenprints with all proceeds going to our friends in Ukraine” wrote Banksy on Instagram.

The foundation wants to put the money towards buying ambulances, generators, heaters and solar lamps for the large swathes of the population living without continuous electricity. Legacy of War also wants to continue to help shelters for women and the LGBTQ+ community in the country.

Legacy War Foundation have already delivered over €280,000 in aid and donations to Ukraine.

The reclusive and somewhat-anonymous artist has been vocal of his support for the Ukrainian people against Russian aggression. In mid-November, Banksy posted a video on his Instagram account compiling his stencil-painted works in Ukraine, including a clip of an individual wearing a gas mask in Hostomel.

“In Ukraine, I saw a Legacy of War team sweep in and provide medical attention, heaters, fresh water and a friendly face to some very desperate people in a bombed-out building,” Banksy said recently.

“They also lent me one of their ambulances to work from, which turned out to be extremely useful when an angry babushka found me painting on her building and called the police. I feel the least I should do is raise enough money to replace the number plates on the ambulances I hotted up,” he added.

Last month, the Ukrainian police stopped an attempt to steal a stencilled work by Banksy in Gostomel, on the outskirts of Kyiv.

The artwork, drawn on the wall of a house destroyed by the Russians, was stolen but “several people were arrested on the spot,” Ukrainian police said. The painting is undamaged.