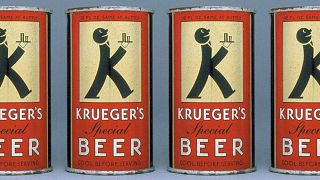 Some days when I’m writing this column, it’s a real struggle. You trawl through the history books in desperate search of a single interesting moment only to find a cultural desert. As if there was something cosmically aligned to make a single day in history utterly devoid of intrigue.

Not so on the 24th of January in history.

On this day so much happened that I’ve had to limit this entry to just some of my favourite picks.

So first up, today in 1935, a New Jersey company called Krueger Brewing revolutionised the drinks industry. For the past two years the brewery had been working on a canned version of their beers.

Prohibition was ending and the market for beer was about to explode in the US. Krueger teamed up with American Can Company and only agreed to the idea if the can company gave them the guarantee that they’d only have to pay for the equipment if the experiment was popular.

And with that, canned beer was born. Soon after Felinfoel Brewery in Wales would follow suit. Then sodas would start getting canned.

Thanks to this one innovation we have the iconic image of Homer Simpson drinking a can of Duff. What’s a better cultural re-view than that?

The computer to change home computers

It was also on this day that another innovation came to the US. Today in 1984, Apple released its first Macintosh personal computer. The Apple Macintosh - later called the Macintosh 128K - redefined the idea of the computer.

That first Mac has gone on to define the idea of an office computer and a home desktop. It’s telling that Macs are still one of the greatest bywords in PCs nearly 40 years later. Cheers for this one Steve Jobs!

It’s 1927 and you want to catch the latest movie down at the pictures. You hear there’s a cracking good title on called ‘The Pleasure Garden’ from this young new director Alfred Hitchcock.

Today was the release of Hitchcock’s feature film debut. The silent film about two chorus girls in London may not feature all the trappings of the auteur quite yet, but many have noticed similarities. In particular, the opening with chorus girls descending a spiral staircase has been compared to ‘Vertigo’.

Released on this day, ‘The Pleasure Garden’ was a hit in the UK and paved the way for Hitchcock’s career that would go onto include films such as ‘Rear Window’, ‘Psycho’, and ‘The Birds’.

A great book ends too early

One of the many peculiar chapters in literature history is the eternal enigma of Czech writer Franz Kafka. A small success in his own lifetime, he demanded that his friend Max Brod would destroy the rest of his works upon his death.

When Kafka did die aged 40 in 1924, Brod would ignore his request. Over the next few years Brod would posthumously publish Kafka’s works. This included his unfinished novel ‘The Trial’.

In 1927, Brod published Kafka’s first novel, the unfinished ‘Amerika’. Brod gave it that title as Kafka had referred to it as his “American novel”, although he himself had called it ‘The Stoker’, after the first chapter short story.

Following European Karl Roßmann on his travels around the US to escape scandal, it contains Kafka’s typical style of humour, paranoia and the unsettling surreal. In short, it’s very Kafkaesque.

Despite its promise, Kafka suddenly stopped writing ‘Amerika’ on 24 January 1914. While the ending is somewhat complete, there are gaping holes in the manuscript that we’ll sadly never know what he would have filled them with.