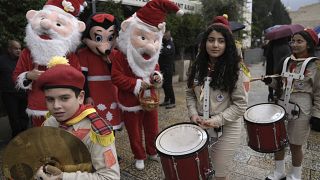 Palestinian march in Orthodox Christmas Eve celebrations at the Church of the Nativity in Bethlehem, the traditional birthplace of Jesus Christ. 6 Jan 2023   -   Copyright  Nasser Nasser/AP
By Euronews  •  Updated: 06/01/2023

Every year on 6 and 7 January, millions of Orthodox Christians around the world celebrate Christmas, almost two weeks after their western counterparts have already feasted and rung in the New Year.

For several countries in Europe, including Ukraine, Serbia, Montenegro, Russia and Belarus, parts of Bosnia and Herzegovina, and African countries such as Egypt and Ethiopia, 6 January is Christmas Eve.

The reason for the difference in festivities is due to the separate calendars that Catholic and Orthodox Christians use to mark the birth of Jesus Christ.

Introduced by Pope Gregory XIII in 1582, the Gregorian calendar is the world’s most widely used civil calendar and the one that western Christians -- including Catholics and Protestants -- use to celebrate Christmas on 25 December.

The calendar was initially proposed to make sure that Easter, the Church's most important festival, always fell around the spring equinox in response to a gradual time drift that was occurring under the previously-used Julian calendar.

But Orthodox Christians — excluding the Greek Orthodox Church, which adopted the Gregorian calendar in 1923, and parts of the Ukrainian faithful — still use the Julian calendar today.

It is a solar calendar that was implemented in 46 BC by Julius Caesar and is a whole 13 days later than its Gregorian counterpart.

The almost two-week gap was caused by a slight miscalculation when the Julian calendar was first devised, leading to it falling more and more out of sync with the solar year as the centuries passed. As a result, Orthodox Christmas will eventually fall on 8 January by the year 2100.

For now, though, starting on 6 January, eastern European Christians traditionally fast until the first star appears in the night sky, symbolising the birth of Jesus.

It is traditional to greet friends and family with “Christ is born!” and reply with “Glory to him!” or "He truly is born!".

The 6 January celebrations are not to be confused with the day of the Epiphany, which is celebrated by Christians following the Gregorian calendar to mark the revelation of God in human form as Jesus.

It's also the day the three wise men, following a star in the desert night sky, appeared in Bethlehem at Jesus’ side following his birth, most notably celebrated in Spain as El dia de Los Reyes.

In some parts of the Orthodox world, one of the staple foods of the occasion is “kutia,” a cold porridge-like dish made out of whole wheat, poppy seeds, raisins, walnuts and honey.

The rest of the meal varies but frequently includes fried fish and beetroot soup made with vegetable stock, beans and cabbage.

Christmas Day on 7 January starts with a visit to church. Some Orthodox Christians prefer to go to a midnight mass on Christmas Eve.

Christmas Day lunch comprises of a variety of dishes, with the centrepiece being a roast suckling pig or goose.

Contrary to western Christmases, it's not customary to give presents in the Orthodox tradition.

In most of Eastern Europe, the custom of exchanging gifts on New Year's Eve stems from the communist times, when authorities believed a more secular holiday should take precedence over a religious one.

In Orthodox Christian countries in Europe, the Gregorian calendar is used in day-to-day lives, but the faithful often revert to the Julian calendar for their holy festivals.

The New Year, according to the Julian calendar, is between 13 and 14 January, with the day of the Epiphany taking place on 19 January.

In countries that adopted the Gregorian calendar, like Bulgaria and Greece, the day of the Epiphany often sees priests throw crucifixes in rivers and lakes, which the faithful then dive into to retrieve — a ceremony meant to symbolise Jesus's baptism.

Across the Western Balkans, Orthodox Christians mark Christmas Eve morning by going to the woods to chop down a section of an oak tree, commonly referred to as "badnjak".

"Badnjak" is then ceremonially brought home, with most of it set on fire, while a branch with leaves is used for decoration.

In Ukraine, the period between 6 and 19 January is a time for “vertep” – a puppet theatre street performance based on the nativity.