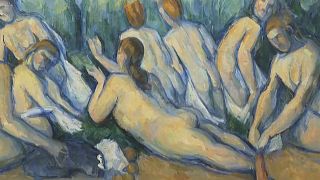 European art lovers have some New Year's treats to enjoy with exhibitions on Cezanne, Van Gogh and Ukrainian Modernism.

The Tate Modern in London has brought together 80 paintings by Cezanne, including most of his masterpieces.

Cézanne was one of the major artists of modernity, overturning codes and influencing many.

A link between impressionism and abstract art, he painted beautiful landscapes that captured the light of southern France.

Another great master of this pivotal period is on show in Rome in the splendid 18th-century Bonaparte Palace. A restored self-portrait opens the Van Gogh exhibition, with nearly 50 masterpieces by the Dutch artist.This retrospective, follows his entire artistic career and geographical journey, from his Dutch period to Arles and Provence, via Paris.

Finally, at the Thyssen-Bornemissa Museum in Madrid, an exceptional exhibition dedicated to the Ukrainian avant-garde of the beginning of the last century is on until April, with several dozen paintings that have been exfiltrated from Kyiv since the start of the war launched by Russia.

A way to preserve a national and universal artistic heritage and avoid it ending up under rubble.