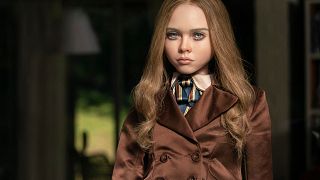 2. A robot must obey orders given it by human beings except where such orders would conflict with the First Law.

3. A robot must protect its own existence as long as such protection does not conflict with the First or Second Law.

These are the three well-known laws of robotics as stated by Isaac Asimov, fundamental principles which top AI engineer Gemma (Allison Williams) clearly slept on during class.

She’s made a career with Purrpetual Petz, some Furby-looking creatures with distressingly ugly mouths designed to outlive their owners and spare them the heartache of loss. Her plan to beat competitors is not to lower the price and quality of her android pets, as her boss David (Ronny Chieng) wants, but to innovate by creating a robotic girl called Model 3 Generative Android - or M3GAN for short.

When her sister and brother-in-law are killed in a car crash accident, she is given even more incentive to speed up her M3GAN prototype (Amie Donald, with the voice of Jenna Davis) in order to give her orphaned niece Cady (Violet McGraw) a companion.

However, the Asimov-dismissing mastermind failed to define the doll’s parameters. But never mind that – after all, what could possibly go wrong with putting a rushed prototype of an experimental android with a traumatised child starting to grieve the loss of her parents?

Plenty, as anyone who has seen Child’s Play or has a passing appreciation for 'Frankenstein' (or common sense) can guess: the toy turns into a primary care giver that becomes a pint-sized Golem with a sadistic Terminator penchant.

Co-writers James Wan and Akela Cooper (both behind 2021’s godawful Malignant) and director Gerard Johnstone (Housebound) didn’t rack their brains too hard when coming up with M3GAN ’s achingly predictable formula; their film is a generic entry into the when-robots-go-apeshit subgenre which is hugely derivative of better films like any of the Chucky films; RoboCop and its fake ads; Ex Machina and that dance sequence; or the recent After Yang and its narrative strands intertwining loss and AI companionship.

That said, there’s still some fun to be had with the unsettling M3GAN herself, especially her sadistic streak when it comes to disposing of people she deems may pose a threat to Cady, who builds an emotional connection with the doll that threatens to become “too hard to untangle”.

But minor peaks don’t eclipse the film’s main drawback: it can’t quite figure out what it wants to be.

A satirical commentary on child pacification through technology, doubling up as a cautionary tale about AI and hurriedly wrestling with grief? The script is far too on-the-nose for these themes to meaningfully register.

A meditation on reluctant motherhood? That’s giving M3GAN far too much credit.

A campy slasher? Sure, but while the kills are fun, there’s not enough demented violence or scares to ensure that it remains memorable - or enough camp, for that matter. Even if M3GAN inexplicably singing Sia’s ‘Titanium’ as a bedtime lullaby to Cady is pretty hilarious.

At the end of the runtime, you get the impression that M3GAN tries to be all these things at once, and fails in being any of them, with its clunky tonal switches ensuring that its attempts at realism are at odds with its more humorous beats. It’s a film about artificial intelligence that needed significantly more intelligence – or at least a clearer grasp and commitment to what it wanted to be, aside from a sequel kickstarter and the last-minute inspiration for future Halloween costumes. And as serviceably entertaining as it sometimes is, M3GAN ultimately feels like it’s destined to become one of those movies wedged in between two better films at a horror movie marathon. What a SHAM3.

M3GAN is out now in cinemas in Europe and the US, and hits UK cinemas mid-January.