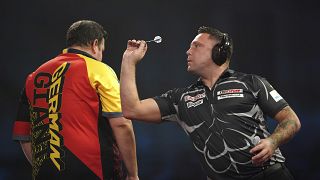 Gerwyn Price shocked the world of darts by wearing ear defenders during his World Darts Championship quarter-final defeat to Gabriel Clemens on Sunday.

Don't worry, you haven't stumbled onto our sports page. This is significant, not because silence is golden, but rather Price's move could change the very culture of one of our favourite pastimes - playing and preening at the oche!

If you've never watched a game of live professional darts take place at the Alexandra Palace before, you may be wondering why the 37-year-old Welshman pulled off such a bizarre stunt.

Well, the crowd at the "Ally Pally" are notorious for being particular raucous and lively - especially towards Price, who has been described as the "pantomime villain of darts".

Who is Gerwyn Price?

Price, formerly a professional rugby player, joined the PDC circuit (World Darts Championship) in 2014 and has achieved a meteoric rise in the sport ever since.

Nicknamed "The Iceman", he has lifted multiple major titles, most notably his first Grand Slam triumph over Gary Anderson in 2018 and then beating Anderson again to lift the biggest prize of all, the World Championship title.

In 2021 he replaced long-time darts champion Michael van Gerwen as the World's Number 1.

Price is known for his flamboyant style of play, including opponent trash talk, wild theatrics and occasional scuffles, which has divided opinion amongst darts fans, with many calling his behaviour "unsportsmanlike".

But love him or hate him, there is no denying that he is incredibly entertaining to watch and very good at darts.

With larger than life characters like Price, it's not surprise that the popularity of the sport has skyrocketed over the past decade. What started as an English pub game is now a major event broadcasted all across the world to millions of fans.

So why did "The Iceman" wear ear defenders in the recent quarter-final?

As previously stated the crowd at the Alexandra Palace are known for being a particular rowdy bunch, and the Welsh dartsman has often been at the centre of their wrath.

In Sunday's quarter final, it was clear that the crowd was very much on the side of Clemens, as Price was greeted with a chorus of boos and sneers upon arrival.

Emerging for the fifth set of clash with Gabriel Clemens, Price came out wearing ear defenders, in a clear tactic to block out the noise of the antagonistic crowd.

This has never been seen in the sport before and raised many questions with viewers online.

The ear defenders did briefly work - Price won the first leg of the fifth set, where he immediately taunted the crowd by mouthing, 'I can't hear you'.

But thereafter the match followed a similar path as before, with Clemens dominating his Welsh opponent.

'I don't think [I would use them]. It's never been done in darts before,' said the Dutchman.

'He doesn't need them, but he's been going through a tough period and he's trying to think about things and he doesn't need to put himself in that position - but that's darts unfortunately, added Van Gerwen.

Price took to social media after his defeat, in a post which suggested that he might not play in the World Championships again. He has since deleted all of the posts on his feed.

"So frustrating you play all year round preparing for the tournament. So gutted I wasn't let play but good luck to everyone left in in. Not sure I will ever play in this event again," he wrote on his Instagram story.

Who knew a pair of ear defenders could cause such a stir?

Michael van Gerwen and Michael "Bully Boy" Smith go up against each other in the grand final of the World Darts Championship on Tuesday night (3 January 2023).

Is this the world’s most prolific board game creator?