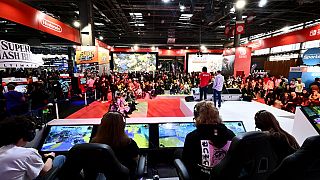 Paris Games Week is back for the first time since the pandemic, welcoming video game enthusiasts in the French capital.   -   Copyright  EMMANUEL DUNAND/AFP or licensors   -
By Anca Ulea  & AFP  •  Updated: 03/11/2022

The Covid-19 pandemic was great for video games.

With the world’s population stuck inside, gaming quickly became one of the most popular pastimes, and European countries saw a huge spike as many sought solace in their consoles.

The number of people playing video games in Spring 2020 increased by 28 percent in the UK, 23 percent in Germany and a whopping 41 percent in France, according to Nielsen Games Video Game Tracking.

But now that lockdowns have lifted, can that momentum be maintained? Organisers of Paris Games Week hope the answer is yes.

The return of gaming communities IRL

The largest video game trade show in France opened its doors to the public on Wednesday for its first in-person edition since the pandemic.

The top console makers in the world - Nintendo, Sony and Microsoft - also have booths at the show, the first time the trio are present at the same trade fair in more than three years.

The organiser of Paris Games Week says the French video game market is booming, with consumers snapping up new games faster than they can be produced.

“The video game market has seen an incredible boom over the last ten years,” said Nicolas Vignolles, the managing director of SELL, the French union of entertainment software producers and organiser of PGW. “It accelerated during Covid, and we noticed that people bought new gear during the pandemic, consoles, and PC hardware dedicated to video games. They were waiting for the end of the Covid period to buy games.”

Last year, French video game sales generated a record 5.6 billion euros, according to SELL, more than double the profits of the French cinema and music industries combined. The sector has grown 13.5 percent over the past two years.

France has been consistently growing into a video game hotspot in recent years, slowly but surely creeping up on the UK’s title of top market in Europe.

France is home to more than 37 million gamers. A recent study by Médiamétrie/SELL found that 7 out of every 10 French people play occasionally and more than 53 percent play at least once a week.

High hopes for the future

And video game expos will continue to play a role in creating a community for gamers off-screen, a place for enthusiasts to share their passion with like-minded individuals.

“I think it’s very important to come to these shows, for the atmosphere at in-person conventions,” said a 20-year-old visitor to Paris Games Week, who preferred to go by her online handle “Weeaboo”. “I get to meet people, but also famous Youtubers and Tiktokers in real life.”

Weeaboo, who was dressed up as the Nintendo character Kirby, told AFP she also appreciated the opportunity to cosplay, or dress up like her favourite pop culture figures.

Paris Games Week will continue through Sunday, 6 November at the Porte de Versailles Expo Centre in the French capital.