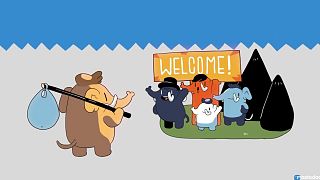 Euronews Next tried out Mastodon, the most popular alternative to Twitter so far since Elon Musk's takeover.   -   Copyright  Mastodon
By Sarah Palmer  •  Updated: 08/12/2022

Since Elon Musk’s takeover, Twitter’s potential for survival has felt tumultuous to say the least.

Mass firings, monetised blue ticks and arming any and the return of banned accounts with the rights to unrestricted “free speech” have meant that a whole host of users are simply packing up and leaving for pastures new.

The problem is, with over a decade and a half’s development under its belt, the Twitter alternatives for those of us still keen to overshare every thought from our subconscious mind in 280 characters or less are somewhat lacking.

One such contender shot to the top of the charts in the early stages of Twitter’s downward spiral: Mastodon.

It’s named after a woolly mammoth-esque creature that became extinct about 10,000 years ago, so that seems like a good omen.

I actually only just discovered this fact as I set about writing this piece at the end of my first week on the platform, and have to say it has at least clarified why I was greeted with a rainbow of small, colourful cartoons - of what I naively presumed were just your standard elephants - when I first opened the app. More on that incoming.

I took to the app for a week to find out more about one of the only viable Twitter contenders battling their way to the top of the app store right now.

Spoiler alert: if Jack Dorsey could get a move on beta testing Bluesky, it would do us all a favour.

We’ll start with the colourful elephants. Terrifyingly reminiscent of the ‘Pink Elephants on Parade’ scene from Disney’s Dumbo, which was likely written on some level of hallucinogenic (let's be honest, we know it wasn’t champagne, Disney). The manic opening branding shot for the Mastodon app does set newcomers up nicely for the chaos that ensues.

The next stage is getting your head round the multiple “communities” - for want of a better word - that the app presents you with. In my haste to see what all the fuss was about, I went with the @ at the top of the list: SDF.ORG.

A quick Google and I realised my error, alas too late. I have to admit, beyond Mastodon I’m still not 100 per cent sure what the ‘Super Dimension Fortress’ is. If anyone reading this feels like letting me know, please do so on Twitter.

On the app, SDF.ORG is a space where users share images of things like computers from the ‘90s. White middle-aged men called Brian and Roy (prime candidates for a midlife crisis) explain how they are going to resurrect them so that they are fully functioning machines once more.

I was in too deep. The server had already added SDF.ORG to my username. This was officially my Mastodon identity.

Today, it became apparent that I wasn’t the only user who had likely been hoodwinked into believing the site that appeared at the top of the initial list was the place to be.

Upon entering the feed, I was served with the infectious joy of one woman, Minerva, who was thrilled to learn #ThickTrunkTuesdays was a legitimate hashtag on the server.

Thankfully this is just a space where enthusiasts share images of trees, but a closer look at Minerva’s profile uncovered her wider interests include theatre, coffee, yoga and astrology (you and me both, Minerva).

I debated reaching out to tell her - warn her, even - that we did not belong here. But, keen to remain an incognito observer, I instead decided that was enough Mastodonning for one day.

By this point, I was determined to learn exactly how this hellscape platform functioned. I did some more research to dig deeper.

The main thing that sets Mastodon apart from what we might call more "sophisticated" apps is its structure.

Unlike the majority of platforms we’ve all come to know very well in the past decade or more, Mastodon is decentralised - meaning it isn’t controlled by a single corporation or individual.

It uses open-source software, where the source code is available to the public, so anyone can theoretically tap into it to modify and enhance the platform.

Genuinely, it [Mastodon] is an interesting concept. And the lack of a raging billionaire whose capital can buy him anything except a sense of humour was refreshing.

Sounds like a risk? Well yes, it is. Decentralised platforms can literally be used by anyone, for anything, including, in Mastodon’s case, the white supremacist social network Gab back in 2019.

But it’s not just the tech blueprint that sets the design apart. Mastodon is made up of thousands of servers, run by different entities but with the capacity to communicate with each other in the "fediverse".

Users are supposed to choose the one they feel is most relevant to them and immerse themselves in the feed.

Other than that, what we might recognise as traditional "tweets" here are known as "toots" (which is disappointing, creatively, in my opinion. Elephants don’t toot, they famously trumpet).

Much like Twitter, you can "reblog" (retweet) and "favourite" (which on Mastodon is a star shape) the content you feel is most relevant or interesting to you.

Things were slowly starting to fall into place.

The news broke that the app Hive Social was storming the race to become the new Twitter. What Mastodon lacks in slick accessibility, Hive offers its users a format we are already well versed in.

The Hive homepage is similar to Twitter, with users having a profile page and sharing statuses which are in turn posted on followers’ news feeds. Design-wise, there’s also an option to share large images as posts, like Instagram.

It’s straightforward, it’s familiar territory, and at the time of writing, it smashed Mastodon’s record with two million sign-ups.

At this moment in time, it felt like Mastodon was on its way out of the running.

As we started to head towards the end of the week, I was, for the first time, offered content from a range of Mastodon’s other servers.

Accounts which had drafted "lonely hearts haikus," hand-drawn sketches of Jo March from 'Little Women,' those who had clearly jumped ship from Twitter and were now taking to Mastodon to share every headline going about Musk’s destruction of the site.

More #ThickTrunkTuesday content which, on a normal site, I would say is probably because I searched the hashtag and was now being targeted but honestly who knows whether Mastodon operates with that level of sophistication. Almost a week in, I’m yet to fully determine this.

After copious amounts of wine and cheese the night before, Mastodon feels worse than usual today.

I spend a limited period of time on the app and return, instead, to Twitter, aimlessly scrolling up and down the familiar feed, grateful for the light relief of my tailor-made news cycle, concocted of accounts I have proactively followed across the past five years.

After a quick search, it transpires #ThickTrunkTuesday does, in fact, exist on Twitter too. Shocked and amazed that I have never noticed before.

My final day of Mastodon. The verdict? Genuinely, it is an interesting concept. And the lack of a raging billionaire whose capital can buy him anything except a sense of humour was refreshing.

But throughout the experience, I’ve felt more like I’m on a forum as opposed to a social media platform.

I did some final searching and discovered that a lot of the existing servers are considerably cooler than the one I found myself on (no offence to Brian and Roy) - environmental focuses, queer spaces, art hubs and political groups to name but a few.

Do I fully understand the platform yet? No, honestly. There’s something not quite there with Mastodon for our generation of social media-curated minds.

If it wants to become a real contender in the battle for a feasible Twitter alternative, it has a long way to go in replicating the slick, straightforward platforms we’re used to.