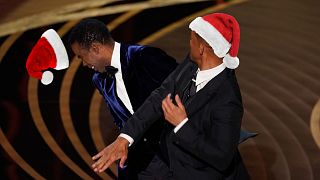 BEST OF CULTURE - Will Smith Slap   -   Copyright  AP Photo
The opinions expressed in this article are those of the author and do not represent in any way the editorial position of Euronews.
By Theo Farrant  •  Updated: 22/12/2022

Our daily Cultural Advent Calendar enters its final stretch with our Highs & Lows of 2022. Today: The infamous slap which bruised Will Smith's reputation in Hollywood

Do you remember where you were when you first saw Will Smith slapping Chris Rock at the Oscars?

I was on a trip to Rome with some friends and had just woken up in my budget hostel. I reached for my phone for a mindless scroll of social media and instantly there it was.

To begin with I was convinced that it was fake. There’s no possible way that Will Smith would act out so violently, on live TV, moments before he would go on to win his first ever Oscar. As the friends I was sharing the hostel dorm with gradually began to wake up as well, we watched the moment over and over again, finding every possible angle, and eventually came to the conclusion that it couldn't be real.

"His hand barely touched him. Actors, especially action actors like Will Smith, know how to pull a punch,” argued one of my friends, who studies theatre acting.

But as it turns out, it was very much real.

The incident floored the entire world and sparked multiple conversations about race, violence, comedy and masculinity.

And in times of chaos you can always rely on thing - the memes.

Following the infamous slap, Smith has been shunned from much of the film industry and banned from the Academy Awards for a decade.

After a few months of silence he eventually apologised to Rock and the comedian’s family in a nearly six-minute long YouTube video.

"Chris, I apologise to you. My behaviour was unacceptable and I'm here whenever you're ready to talk", said Smith.

More recently, the Fresh Prince of Bel-Air star made his first talk-show appearance since the incident and described his actions as "a rage that had been bottled for a really long time.”

"It was a lot of things. It was the little boy that watched his father beat up his mother. All of that just bubbled up in that moment," said the actor on the Daily Show with Trevor Noah.

But Smith wasn't just there to clear the air, but also to promote his new slavery-era film Emancipation, which tells the story of Peter, a slave seeking to escape a plantation in Louisiana.

Inevitably the film, which was filmed months before the Oscars incident, has been interpreted as a transparent attempt to revive Smith's career and blot out the bruise the slap has left on his reputation.

But Smith is hoping the audience will see beyond his actions and recognise the hard work and dedication of the film's production team.

As for the future, the actor has a number of projects reportedly in the pipeline but whether or not he can revive his career remains a hot topic in Hollywood. And whether or not it's forgive and forget, or if his reputation is tarnished beyond repair, this unexpected outburst was one of this year's major cultural talking points - for better and for worse.