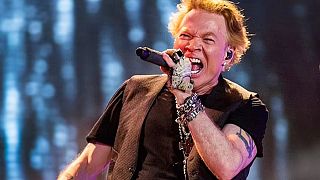 Ozzy bites off bat heads, David Lee Roth needs to do a karate kick, there wasn’t a guitar Pete Townshend couldn’t smash, and no Metallica or Rammstein gig would be complete without some signature pyrotechnics…

Rockers’ on-stage signature moves are expected and loved by fans, even if some moves are arguably more iconic than others.

When it comes to Guns N’ Roses, band frontman Axl Rose tends to toss the microphone into the crowd at the end of each gig, a longstanding tradition to signal the end of the concert.

However, it seems that he’ll be holding onto the mic for the foreseeable future.

Rose penned a statement on Twitter following a report that one fan at a concert in Australia was injured after he chucked the mic.

"It's come to my attention that a fan may have been hurt at r show in Adelaide Australia possibly being hit by the microphone at the end of the show when I traditionally toss the mic to the fans," he wrote.

Indeed, after the band's final song, 'Paradise City', Rose threw the microphone and allegedly struck Rebecca Howe in the face.

"If true obviously we don’t want anyone getting hurt or to somehow in anyway hurt anyone at any of r shows anywhere. Having tossed the mic at the end of r show for over 30 years we always felt it was a known part of the very end of r performance that fans wanted and were aware of to have an opportunity to catch the mic. Regardless in the interest of public safety from now on we’ll refrain from tossing the mic or anything to the fans during or at r performances."

GN’R fans have shown their support for Axl Rose and are up in arms about the situation, not wanting the tradition to change. They have also been less sympathetic to Howe’s account of the situation.

Let’s just hope that Iggy does get cold feet and stops stagediving, or that Mick Jagger decides his Rooster Strut could be hazardous to fans…

Guns N' Roses have been on a world tour for two years, And are heading to New Zealand for two more tour stops on their highly anticipated 2020 tour, which was postponed due to the pandemic. The band ends the tour next year in London at Hyde Park on 30 June 2023.