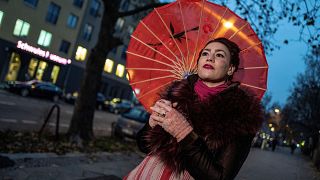 Emma Pankhurst on the "We Have Always Been Everywhere" audio guide, dressed as a sex workers from the 19th century   -   Copyright  JOHN MACDOUGALL/AFP or licensors
By Euronews  with AFP  •  Updated: 16/12/2022

Sex workers in Berlin are trying to rid their profession of stigma with the help of the 'berlinHistory' app.

The audioguide named 'We Have Always Been Everywhere" was launched by members of the sex industry, local officials and the Schwules LGBTQ Museum.

Users can now discover the history of the trade in the German capital as they're guided on a walking tour through the city's famed redlight district.

While Germany has relatively liberal laws on sex work, many industry workers go undetected due to compulsory registration rules.

According to human rights organisations, this forces those who work illegally to go further underground and leaves many vulnerable to sexual abuse.

"We never learn. For some reason the system has not yet learned that the best way to keep us safe and keep us well is for us to work without all of these regulations and without all of the state involvement" says Emma Pankhurst, a sex worker who emigrated from the US three years ago.

Sex workers say they hope this initiative will help normalise their profession.

"We upset people just by working to feed our families and our children and survive," says Pankhurst.

"We're your neighbours, we exist here, we've been here for generations and we belong here and we deserve to work here safely" she adds

Germany legalised sex work in 2002 and some 24,000 people are registered as working in the industry across the country.

However, the vast majority of Germany's estimated 400,000 workers are operating outside the legal framework, many of them migrant women and victims of human trafficking and organised crime.

Click on the video above for the full report.

Dutch sex workers protest for right to get back to work

Prostitution and the pandemic: Amsterdam's sex workers' struggle to survive under lockdown