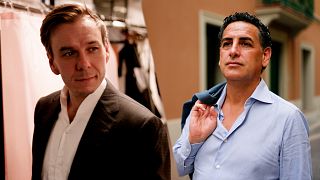 They are the heroes of opera. When tenors hit the high C, the audience is enthralled. But what is their secret? How do they manage to sing in this high register and what happens in their body?

The magic of the tenor voice

With these questions we start the new series "The great voices of today" - the first episode is dedicated to tenors. We talk to two of the greatest tenors of our time: Juan Diego Flórez and Benjamin Bernheim who give insights into the art of the high notes.

The tenor voice is the highest natural male singing voice. The average male voice is a baritone voice. There are only 3 or 4 notes in range between baritone and tenor – but it makes all the difference.

Tenor is from the Latin ‘tenere’, which means ‘to hold’. This is because in very early music – from about 1250 to 1500 – the tenor’s job was to ‘hold down’ the melody, providing the foundation for the music.

Tenors - the heroes of opera

The tenor’s voice is a phenomenon. "I think audiences love high notes," says Peruvian Juan Diego Flórez, one of the greatest tenors in the world today. "Because they ring in their ears and it's exciting."

No other voice prompts such a reaction from audiences. It’s like a circus high-wire act. "The bet we make on a tenor is, will he succeed?" says world-famous French tenor Benjamin Bernheim.

Such pressure requires nerves of steel. "Even when I go to the opera I listen out for the tenor," says Bernheim. "Because I know that’s how people watch us. It's like: let’s see if he can do it."

How to reach the high notes

It’s one of the highest notes for a tenor: the infamous High C. The tenor is the highest male voice. His vocal range generally spans two octaves from C to C. Bernheim says the technique takes years to master.

"The tenor is a voice that doesn't exist in nature," he explains. "It takes a lot of patience to craft it.

"Many people who love opera find this voice a bit magical because all the other voices are 'natural' so to speak.

"The soprano voice that goes into the high notes, it's in the nature of the voice.

"Whereas the tenor, it's like there's an extra challenge that's been added and there's a special expectation on tenors."

So how does a tenor sing from the bottom to the top of his range seemingly without changing gear?

The secret is called the passaggio: the bridge.

"The natural tenor voice like the natural baritone head voice has a certain limit," says Bernheim. "And the passaggio determines the point where you have to pass to a mixed voice or to a full voice so that the chest voice stays right at the top.

"The mixed voice is connected both to the chest voice and the head voice.

"It's an art to find the balance."

But what really happens inside the body when a tenor sings in the upper register?

In Salzburg, tenor student Ivan Águila is having an MRI scan to visualise what we never get to see: the tremendous physical challenges.

"It all starts with the diaphragm," says Nikolaus Mayr, Chief Radiologist as he looks at the resulting images at the Diagnosezentrum Salzburg. "There needs to be pressure coming from the chest. The lungs are contracting. His throat muscles are working as well. You can see here how the tongue builds up, the larynx tenses and here you can see how the air flows out to produce the sound."

"It was very difficult to sing in there because it’s very loud," says Águila. "You also have to breathe well into the muscles here in order to hold the sound for a long time even when you lie down. It was nice to discover that."

"So this whole mechanism that we’ve witnessed can be described as peak performance of the human body," says Mayr.

"If you just look at the cerebral functions taking place in the brain in order to control all the muscles, so that one exact note comes out, it’s remarkable."

This energy concentration, the cluster, hits a very special sensitivity in the ear, because there 3000 hertz is captured particularly well.

There is another reason why the tenor’s voice resonates with us, says the Salzburg Festival’s very own ENT specialist Josef Schlömicher-Thier.

"A tenor has the peculiarity of producing a particular overtone cluster," says Schlömicher-Thier who is Consultant Doctor at the Salzburg Festival. "All singers have that, but the tenor can produce it especially at around 3000 hertz.

"But then what happens with the audience? This energy concentration, the cluster, hits a very special sensitivity in the ear, because there 3000 hertz is captured particularly well.

"That's where this feeling comes from: it sends shivers down my spine. I get goosebumps when this point is reached, this bang. And then people stand up and are out of their minds."

The art of the modern tenor has its roots here in Italy. It was Gioachino Rossini who thrust the tenor’s voice into the spotlight.

Flórez shares a special bond with the Italian composer.

"Before Rossini, the main stars of opera were the sopranos and the castrati," he says. "But when Rossini came the castrati were abolished. So he gave the star parts to something that would be similar to the voice of the castrati, the tenors and the mezzo-soprano."

In 1831 during Rossini’s opera “William Tell” a sensation happened: French tenor Gilbert Duprez blew away audiences with his revolutionary delivery of the High C.

"Duprez was in Italy practising in his dressing and he was trying these high notes," recounts Flórez. "And in the dressing room, he hits this High C with a full voice. And he's astonished by this sound. And he wants to keep it. And he wants to sing like that. And he does it. And everybody says, 'Wow, what is this?' So he was the father of the High C as we know it today."

And then a global superstar was born: Enrico Caruso

"He really was the first tenor to sing for a lot of people, for arenas," says Flórez. "And everybody in the world had a disc of Enrico Caruso at home. He was that famous."

Spread your wings and fly

Sparkling and mind-boggling vocal fireworks are a speciality of Rossini’s operas, among them Le Comte Ory.

Flórez is preparing for an epic performance: "With the High C you have to make up your mind before. You have to think it and then you do it.

"Am-I addicted to standing ovations? Of course, it's nice to have a standing ovation. And the public, you know, when you come out, they rise and they stamp their feet, that is great, of course.

"But I've been always really very hard on myself, very self-critical.

"I still record the rehearsals and listen after. I started lately to put checks on the score when I did well.

"So I think you have to have a nice balance."

You have to jump into the void, into the unknown and then spread your wings and fly.

"The questions are always the same - how do you do it?" says Bernheim. "How are you able to hold these notes? It's by watching, by going to see others.

"You have to jump into the void, into the unknown and then spread your wings and fly."

"I don't think you need to have the High C," says Flórez. "You need to be a good singer. For me, I want to be touched by a singer. The best singers are the ones who make you feel something."

Footage of Enrico Caruso was restored by Fondazione Cineteca di Bologna, in collaboration with MoMA – The Museum of Modern Art, BFI National Archive and Gosfil’mofond of Russia.