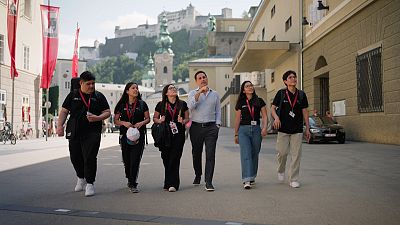 A journey of a lifetime: Legendary tenor Juan Diego Flórez takes the Sinfonía por el Perú Youth Orchestra to Europe where they make their debut at the most important festival of classical music: The Salzburg Festival.

Sinfonía por el Perú has transformed my life in all areas, especially on a personal level

Flórez set up Sinfonía por el Perú back in 2011. Its aim is to provide free music education to Peruvian children and teenagers alike, with the ambition of changing lives through the power of music. Many of the students come from difficult backgrounds but Sinfonía por el Perú has helped them to overcome the challenges they have faced.

“[Here] they find a family; they find a group. They know that alone they can do things, but together they can [seize] the world,” Flórez says.

To date, 30,000 Peruvian youth have availed of the project – with 6,000 currently enrolled in the programme. They can pick up instruments here or learn to sing.

18-year-old Diana Espinoza is now a flautist in the Youth Orchestra. She is from one of Lima's dangerous neighbourhoods. Ahead of the trip to Salzburg, she said “I feel very excited. Taking on this challenge is a big responsibility with the other members of the orchestra. I know we are going to do very well.”

In 2019, the organisation carried out its own qualitative research to measure how the initiative has impacted its beneficiaries. It studied the students in three domains: personal, family and school.

Within family settings, 60% of children and adolescents improved ‘family communication’ – and had seen a drop of 34% in domestic violence or physical punishment in the household.

Diana’s mother, Gladis, has nothing but praise for the project. “It’s so great that it's happening, for the whole family. For all the kids it has changed their lives in every way by fostering the values of responsibility, discipline, and teamwork. I’m very proud of my daughter.”

In school settings, those in Sinfonía saw a 34% improvement in their self-efficacy skills. The study also found an increase of 29% of students willing to pursue higher education or a specialised degree – while the number of minors in the workforce dropped by 23%.

The group accompanied the opera singer on stage in the Großes Festspielhaus ( or Large Festival House) back in August 2022. Only the best of the best are asked to perform and represent the social programme in Flórez’s Youth Orchestra.

The Salzburg festival is more than 100 years old. It was first set up by Austrian novelist Hugo von Hofmannsthal, theatre director Max Reinhardt and German composer Richard Strauss. In its essence, it hopes to capture classical greats of the past Wolfgang Amadé Mozart – who was born and raised in Salzburg.

“They bring their spirit, their enthusiasm, their optimism and their message. The message that for them, music was life changing and they want to change the world with music,” Flórez says.

The ensemble also played compositions that originated closer to home, such as songs by Peruvian singer Porfirio Vásquez and composer Daniel Alomía Robles. Espinoza explains that it was important to represent their identity by performing songs by fellow Peruvian musicians.

“I think it’s what makes us Latin American, it's like a union for music, popular music. So, we play music wherever we go: when we bathe, when we eat, when we’re driving. Without music, I don't think we would be the way we are.”

The experience of performing in Austria has had a profound impact on the Youth Orchestra members. That stands to reason according to its internal research.

The aforementioned study above in 2019 saw that those who picked up an instrument saw a huge increase in one’s self-confidence and social skills.

“Sinfonía por el Perú has transformed my life in all areas, especially on a personal level, because it gave me a lot more self-confidence and it also gave me a career. Now I know that I want to dedicate myself 100% to music,” Espinoza says.

For many, music will stay with them forever because of Flórez’s motivation and determination to change the lives of Peruvian youth.