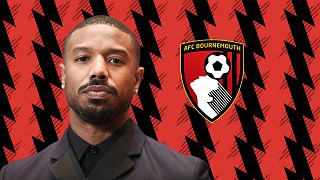 AFC Bournemouth, a team currently ranked 14th in the Premier League, has been taken over by Las Vegas-based businessman Bill Foley, following a £120 million (approx. €139 million) takeover, as he becomes the latest American to invest in English football.

To the surprise of many online, Hollywood actor, director and producer who starred in Marvel's Black Panther series, Michael B. Jordan, will become a minority shareholder of the club as part of the deal.

However, the Creed star is not the only A-lister to have stakes in a football club.

Let's take a look at the growing list of celebs who do...

In February 2021, Hollywood actors Ryan Reynolds and Rob McElhenney took over Wrexham Association Football Club, a small team from the north of Wales, in which was documented in a documentary series streaming on Hulu, Disney+ and ESPN+.

"I am so obsessed with this sport now that I actually hate this sport. Like, I wish it didn't occupy my every thought," jokes Reynolds.

You may know Mindy Kaling from starring as Kelly Kapoor in the US version of 'The Office' - but did you know she is also a part owner of Swansea City Football Club?

While being interviewed on the UK morning chat show Lorraine, Kaling was asked: "Is it true that you've got shares in Swansea?" To which she responded: "It's true!".

"Football is such an amazing sport, it is so incredibly popular. I was inspired by Oprah, who invests in things she believes in, I believe in this team, and I think it is a smart choice. I don't think it [my interest] is going anywhere," the actress later revealed.

From the get-go, the female football club has strongly pushed its values of community and female empowerment.

“We love soccer,” says Portman. “But we also have a secondary mission, which is to push forward the state of conditions for female athletes.”

The club, which is the largest female-led ownership group in professional sports, aims to challenge industry norms by making player pay a priority and offering training to help the players find careers after retirement from the sport.

NBA basketball icon LeBron James is in fact a partner of Fenway Sports Group, who currently own Liverpool FC.

The Los Angeles Lakers forward bought 2% of the Premiere League football club with his business partner Maverick Carter for $6.5 million (€5.4m) in April 2011 - which has since proved to be a highly profitable venture.

In March 2022, James and Carter converted their stake in the football club for part-ownership of FSG, which is estimated to be around 1% of the group.

It's no surprise that in 2022 Forbes announced that the 37-year-old basketball superstar became the first active NBA player to make their billionaires list.

McConaughey, the Oscar-winning actor who has starred in major box office hits including Interstellar and The Wolf of Wall Street, purchased shares in his hometown Texas club Austin FC three years ago.

Austin FC joined the MLS (Western Conference) in 2021 and finished 2nd overall in the most recent 2022/23 season, just below Los Angeles Football Club in 1st place.

In a viral clip shared online, McConaughey was seen hyping up the Austin FC fans at the Q2 Stadium by recreating his iconic chest beating scene with Leonardo Di Caprio from The Wolf of Wall Street.

As a famous cook, it's no surprise that Delia Smith has her fingers in many pies - one those being Norwich City football club.

The legendary 81-year old TV presenter, known for her no-nonsense style of cooking, and her husband Michael Wynn Jones, have an enormous 53% share of the "Canaries", who currently play in the Championship.

Smith's long-standing passion and enthusiasm for the football club has made her a favourite with the fans - and she even created one of the most legendary moments in footballing folklore.

In 2005, with her beloved Canaries needing a win against Manchester City to ease their relegation worries, Smith made her way onto the pitch at half-time to deliver an impassioned cry to fans at the Carrow Road stadium.

This moment is just perfect.

For decades, British singer and songwriting superstar Sir Elton John has had a close relationship with Watford Football Club.

A boyhood Watford fan born in Pinner, Sir Elton bought the club and became Chairman and President in 1976 and appointed Graham Taylor as manager.

The 'Rocket Man' sold the club to English businessman Jack Petchey in 1990, bought it back in 1997, but eventually stepped down as Chairman for the final time in 2002.

Throughout his time as owner, he invested large amounts of money and saw the club jump three divisions into the English First Division at the time.

To this day he's "still standing" as a major investor in the club, despite no longer being the majority shareholder.