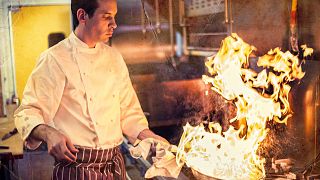 The Netherlands’ De Nieuwe Winkel was named best vegetable restaurant in the world at the Barcelona Gastronomic Forum last week.

The plant-based restaurant in the eastern city of Nijmegen, near the German border, is the first Dutch restaurant to take home the title, which is awarded every year by a jury of culinary experts.

Chef Guus Bakker said the team would continue to get creative with their dishes.

“Very creative processes arise that eventually bring new possibilities,” Bakker said. “We are now making butter based on the cream of sunflower seeds, for example.”

A recent pan-European study showed nearly half of Europeans are eating less meat than they were before.

As concerns over health and climate change grow, more and more people have been enticed to go meatless and interest in vegetarian dining is climbing.

So where else can European foodies go for a gourmet meal with less meat?

Here are some of the other vegetarian and flexitarian-friendly restaurants in Europe that made it to the We’re Smart Top 100 ranking.

With three Michelin stars, Piazza Duomo is a world-class culinary voyage with chef Enrico Crippa at its helm. Crippa personally selects the organic produce from the restaurant’s vegetable garden every day, transforming it into surprising seasonal dishes with vegetables as the star. While this restaurant is not fully vegetarian, there are several meatless options. The fixed menu is €290.

This two-star Michelin restaurant has a full 7-course vegetarian menu that transforms produce into sophisticated dishes. Each course features one vegetable, like the “salt crust cooked” beetroot with hazelnuts and Jerusalem artichokes. The fixed menu is €154.

Chef Alain Passard took an enormous risk in 2001 when he removed red meat from the menu at his 3-star Michelin restaurant in the heart of the French capital. His decision to focus on fresh produce paid off and L’Arpège kept its three stars as a vegetarian restaurant. Today, L’Arpège has reintroduced some meat and fish but there are still ample vegetarian options.