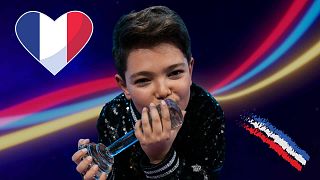 It has been an incredibly successful last week for France.

Not only have they made it to the semi-final of the World Cup, kicking out England in the process, and secured long-awaited UNESCO status for their beloved baguette, but the country has also just won the Junior Eurovision Song Contest.

France's Lissandro was crowned champion of this year's competition with his upbeat song 'Oh Maman!', topping the jury vote and placing third with the public.

The 13-year-old singer won with 203 points, beating host country Armenia in second place, Georgia in third, and Ireland in fourth.

The United Kingdom's entry Freya Skye came fifth overall with 146 points - although she did win the public vote.

"I'm so happy, thank you everyone. Vive La France," cheered an excited and animated Lissandro, as he accepted his award on stage.

In total, 16 countries competed this year's competition, which was held at the Karen Demirchyan Complex in Yerevan, Armenia. Contestants needed to be aged between nine and 14 to perform.

11 former winners of the competition made a special appearance to sing a medley of their winning songs together with a local children’s choir.

Lissandro was born in Moselle, a small town in the east of France.

Since the age of five, he has had a strong passion for music and singing, with some of his biggest influences being Elvis Presley and Bruno Mars. He can reportedly sing in five different languages.

The young talent previously competed in The Voice Kids France in 2020, who blew away the judges with his energetic rendition of Presley's 'Too Much'. All four judges turned their seats during his first performance.

Under the guidance of French singer Jenifer Bartoli, Lissandro made it al the way to the final.

Check the video above for a look at the ceremony and Lissandro's win.