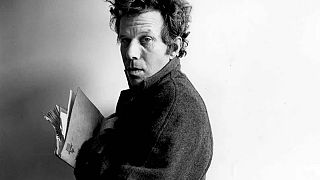 Why should I care, you may ask?

Quite simply because the singer-songwriter is a one-of-a-kind pioneer, one of the last of a generation who has shaped and influenced countless artists and genres.

More than that, Waits has kept listeners waiting for 11 long years now for a new album, as his last recording, ‘Bad As Me’, was released in 2011. Since then, we’ve mostly seen him on the big screen, with roles in Seven Psychopaths, The Ballad of Buster Scruggs, The Old Man & The Gun, The Dead Don’t Die and Licorice Pizza.

So, Happy Birthday, we’re thrilled about your acting, but time waits for no man and you are missed. New album soon, please?

For those who aren’t aware of Waits' work, the best way to describe him is as a musical Dadaist: willfully anachronistic and scarily unique.

He croons, growls and gutturally laughs, boasting lyrically layered images and atmospheres, as well as a variety of vocally contrasting personas – a lot of which sound like he’s been gargling razor blades and washing it down with Bourbon.

If you don’t know him, here are a few tracks to get you going:

‘Heartattack and Vine’, from the 1980 album of the same name: “Don’t you know there ain’t no devil / There’s just God when he’s drunk…”

‘Clap Hands’, off arguably his most-celebrated album, 1985’s 'Rain Dogs': “Sane, sane, they're all insane / The fireman's blind, the conductor's lame / A Cincinatti jacket and a sad luck dame / Hanging out the window with a bottle full of rain / Clap hands, clap hands…”

‘Telephone Call From Istanbul’, one of Wait’s most underrated songs, featured in 1987’s ‘Frank’s Wild Years’: “Never trust a man in a blue trench coat / Never drive a car when you’re dead…”

2002: In Amsterdam, two Van Gogh paintings were stolen from the Van Gogh museum: “View of the Sea at Scheveningen” (1882), one of only two seascapes van Gogh painted during his years in the Netherlands, and “Congregation Leaving the Reformed Church in Nuenen” (1882-84), showing the church where the artist’s father was a pastor, a gift to the artist’s mother. The heist apparently took less than 4 minutes.