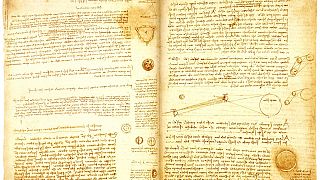 On this day in 1980 Leonardo da Vinci’s famous Leicester Codex was sold for a whopping $5.1 million (€16.6 million by today’s standards).

Industrialist and art collector Armand Hammer shelled out for the notebook and commissioned Leonardo da Vinci scholar Carlo Pedretti to translate each page to English. He completed the project in 1987.

The notebook contains Da Vinci’s theories on astronomy, as well as passages on the movement of water, recommendations about bridge construction and the phenomenon of planetshine (the diffuse reflection of sunlight from a planet).

The codex is also rumoured to contain a whole chapter on how it’s a terrible idea to cast Tom Hanks sporting a mullet to play in an increasingly poor series of films based on Dan Brown novels.

But it’s only a rumour - and Pedretti was not available for a quote on this.

Strangely, and in keeping with the da Vinci theme, today in 1913 was also when the Mona Lisa was returned after being stolen from an Italian nationalist two years prior. Thief Vincenzo Peruggia was sentenced to 14 months in jail.

Whether or not that was foretold by the enigmatic codex is also a matter of speculation.

The new Waterloo Bridge, seen from the north side of the River Thames, London, Dec. 12, 1944, after it was opened to six lanes of traffic. Top right is Waterloo Railway Station.

Actress and singer Dolly Parton wrote and sung the theme tune for her movie "9 to 5" which premiered on this day in 1980. Parton stars in the US comedy alongside Jane Fonda and Lily Tomlin as three working women who live out their fantasies of exacting revenge on their autocratic, "sexist, egotistical, lying, hypocritical bigot" boss. If you haven't seen it, go find it. A feminist classic.

The concert was held in response to Hurricane Sandy, which devastated portions of Northeastern US, the Caribbean and the Mid-Atlantic in late October 2012 and cost an estimated $60 billion in damage in the US.

Many famous performers took part in the charity event, including The Who, Bruce Springsteen, Alicia Keys, The Rolling Stones, Roger Waters, Michael Stipe and, for the first time in eighteen years, the surviving members of Nirvana (Dave Grohl, Krist Novoselic and touring member Pat Smear) who performed together in a collaboration with Paul McCartney during his show-closing set.