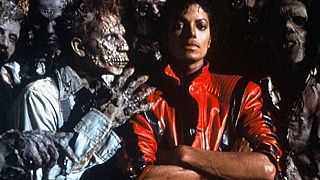 Directed by John Landis (National Lampoon’s Animal House, The Blues Brothers, An American Werewolf in London), the short film cost about $500,000 to make.

The longform version of the video was a hit and sold nearly 10 million copies on VHS. It also sent the album to #1 for 17 weeks straight, making it the best-selling album of both 1983 and 1984.

The video is widely credited for helping it become the best-selling album in history.

“Thriller” was a hugely influential video at the time and set a new benchmark, changing how the music business promoted and marketed releases. In 2009, it became the first music video inducted into the United States National Film Registry by the Library of Congress as "culturally, historically or aesthetically significant".

British actor Ben Kingsley talks to Britain's Princess Diana at the London premiere of the film Gandhi, in which Kingsley played the title role - 1982.