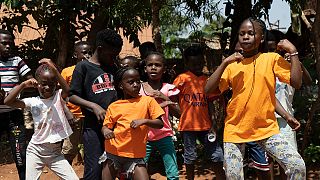 Dancing is a universal language; it inspires people of all ages and backgrounds. The power of dance can bring love and encouragement to communities, creating a better and livelier world.

TGK is a dance group and NGO based in Kampala, Uganda. Kavuma Dauda founded it with the sole mission of providing housing, health care, food, and education for disadvantaged children.

Kavuma uses dance to encourage children to enjoy themselves, but his main goal is to provide them with an education so they will have a better future. A stranger funded his education when he was a young boy and couldn't afford to go to school. He made a vow to himself that if he were ever in a position to help others, he would, as a sign of gratitude to his stranger.

Kavuma's own story could be that of any of the children he mentors. His father passed away when he was very young, and his family struggled to make ends meet. They couldn't afford to pay school fees, so he spent his time playing football in the streets. That's when a school football coach noticed Kavuma playing in the street and offered him a chance at a better life.

"He told me if I give you a chance, would you go back to school? I said, yes, that's what I really want. So, from that day, I promised myself that when I grew up, at least I would help one child," Kavuma says.

Creating the chance at another life

Many of the kids in the dance group identify with trauma and poverty. Triplets Ghetto Kids member Nabakooza Patricia has five siblings, and her parents couldn't afford to send them all to school. The siblings would take turns attending classes and often miss school for long periods of time when the money ran out.

Now 18 years old and a senior in high school, TGK changed Patricia's life. As her dance teacher, Kavuma noticed that she was frequently absent, he called on her to know why. When he learned about her financial situation, he asked her one question.

"Patricia, do you love school?"

The very next day, he introduced her to Triplet Ghetto Kids. He told Patricia that if she stayed part of the group, her school fees, clothes, and food would all be provided. Her part of the deal was to continue dancing. Patricia never looked back.

From the Streets to the World Stage

Triplets Ghetto Kids did more than give these kids a platform and an education; it helped them become international stars. The group filmed their dance videos and uploaded them onto YouTube. In 2013, one of these videos, their dance cover of the song Eddy Kenzo's Sytia Loss, was trending on YouTube and social media.

"While working on that video, we didn't know that it was going to go viral because back then, we didn't know what the word viral meant," says 20-year-old Ronald Santiago, a member of Triplet Ghetto Kids.

From then on, they became an international sensation. They have appeared on a U.S talk show and have been interviewed by host Jimmy Fallon. They have also performed with singer French Montana and have travelled the world.

TGK told Scenes that belonging to a family is one of the best things about being in a group. They see Kavuma as a father figure, a mentor- and the group members as their siblings and confidants.

"Kavuma saved me from the hard time I was going through. And not only me but everybody who is in Triplets Ghetto kids. He is a father, who raised us," says Patricia.

Triplet Ghetto Kids have inspired millions of people in Uganda and are taking the world by storm. They intend to use their fame and recognition for the greater good. Their goal is to carry on Kavuma's legacy by helping others in the community who are in need. The future for these kids looks brighter than ever.

The Great Equaliser: One man helping pave the way to universal education