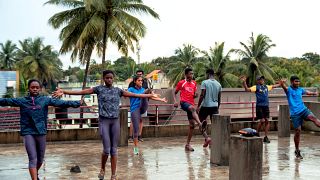 Three, two, one! The whistle blows, and Ravikiran Siddi sprints towards the finish line. He's moving so fast that the spectator's eyes can barely follow him. He's running on a broken road in India, aiming to break his own record for the 100-meter run. But in his head, he's on an Olympic track, racing against Usain Bolt, competing for the gold medal.

21-year-old Ravikiran's dream is to become the fastest runner in the world. He told Scenes that his fastest run time is 10.6 seconds. He is just one second short of Usain Bolt's world record. Bolt is known for striking a lightning bolt pose after winning races and is widely regarded as one of the greatest sprinters of all time.

Ravikiran belongs to the disenfranchised Siddi community in Karnataka, India. Achieving his dream had seemed impossible. That was before the coaches from the Karnataka-based NGO Bridges of Sports came to his village and saw his potential.

"I was very happy. They pay all my expenses and help me study, too," says Ravikiran, whose family was struggling financially. "I didn't know much about running techniques; I just knew running as a form of exercise, like tire runs. That's all I knew." He adds.

Bridges of Sports: a strong mission

Bridges of Sports has a mission to develop the local athletics scene in the socio-economically excluded rural communities in India. Currently, they are focusing on the Northern districts of Karnataka, where Ravikiran and over 40,000 other members of the Siddi community reside.

"We sponsor the child's education, training and even their nutrition. If they perform well, we also offer them scholarships," explains Coach Rijwan Bendegeri from Bridges of Sports.

Rijwan works specifically with the Siddi community, recruiting promising future athletes like Ravikiran. He decided to work with them because their potential was going unnoticed.

"The Siddi community people weren't exposed to the world. Siddis closer to the cities still stepped out, but the ones deep inside the forest didn't get any opportunities to showcase their talent." Rijwan told scenes.

The Siddis are, primarily a farming community that often settles in forests. They are descendants of various tribal communities from Africa that settled in India centuries ago. Due to their darker skin and curly hair, they have been the target of racism by larger Indian communities, who see them as outsiders and often socially alienate them.

Oftentimes, Siddi children are put to work to help support their families, putting their education on hold. "Children work at hotels, and some also work on the farms. They would go to school for six months and then work for the rest." Rijwan explains.

"No one knows that we Siddis live there. Children are very talented, but no one recognises it. Their talent dies there." Ravikiran adds.

Running towards a better future:

Bridges of Sport offers a variety of sports and academic programs to these children. As a result of working toward their dreams, they can see a brighter future for themselves and their families.

Akshay Prakash is a student working hard to create a better future for his family, one sprint at a time. "I want to end all the problems we have at home. I want to get many things and even build a new home," he says.

As a result of his impressive performance in local and district competitions, Akshay's ambitions are well supported. "In the Village and District Subdivision, I've won all gold [medals]. At the district levels, [I won] a gold and a silver medal," he tells Scenes.

Akshay and other Siddi athletes knew their achievements would make their families proud, but their community's support humbled them. It boosts his confidence to hear them cheer for him.

"When I visit [my village], they say "Sportsman is here!" and that makes me very happy."

Ravikiran says that his personal success has benefitted his community too. "People are aware of my community now. I got featured in the news and on some Youtube channels. I am getting sponsored now. There are also sponsorships for my Siddi community,"

Thanks to organisations like Bridges of Sport, the future is bright for these children as they continue working towards their athletic goals and contributing to their communities.

Meet the kitesurfing instructor harnessing the wind and waves in Qatar

Meet the female football team united in faith and football