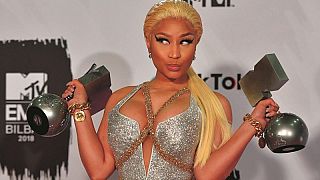 Nicki Minaj has come under fire for teasing a 2022 FIFA World Cup Anthem.

On each boot is the name of one of the song’s three performers: Minaj, Columbian singer Maluma and Lebanese singer Myriam Fares. The three numbers that appear - 11, 18 and 22 - seem to indicate that the single will drop at the end of this week, on Friday 18 November.

The backlash was prompt, with many pointing out that Nicki Minaj is a hypocrite, considering she has a queer fanbase who cannot safely visit Qatar to watch the World Cup because of the host country’s anti-LGBTQ+ laws.

One Tweet reads: “hi @nickiminaj not sure if you’re aware but your LGBTQ+ supporters from Qatar are in danger and you're funding and stadning by their disgusting views. Qatar was voted as the one of the worst places in the world to be gay. Homosexuality is illegal and punishable by imprisonment.”

Another said: “Nicki Minaj doing a song for the Qatar cup when that country is violently homophobic and against the rights of LGBTQ+ is something, especially considering majority of her fanbase are a part of that community.”

Nicki Minaj has not responded to the criticism.

Pop star Dua Lipa recently shut down rumours that she would be performing at the World Cup, writing: “There is currently a lot of speculation that I will be performing at the opening ceremony of the world cup in Qatar. I will not be performing and nor have I ever been involved in any negotiation to perform. I will be cheering England on from afar and I look forward to visiting Qatar when it has fulfilled all the human rights pledges it made when it won the right to host the World Cup. One love, Dua x”

The FIFA World Cup starts on Sunday 20 November, despite many fans boycotting the tournament due to Qatar’s LGBTQ+ rights record. Under Qatar’s Penal Code 2004, queer people can be, if convicted, imprisoned for up to seven years for having sex, and same-sex relationships are punishable by death under Sharia law.

Qatar’s ambassador to the UK has said LGBTQ+ fans visiting the country can “hold hands”; however, he clarified they should be “mindful” of “public displays of affection."

Last week, the German government condemned comments by a Qatar World Cup ambassador who described homosexuality as "damage in the mind" in an interview with German television.

Khalid Salman, a former Qatari international footballer and one of several official representatives of the forthcoming tournament, said gay people coming to the country would have to "accept our rules".

Germany's interior minister, who is also in charge of sport, called the statement "terrible".